Great news from my favorite Marine in the Middle East: Afghanistan is dull!

In fact, the only thing that’s blown up around Wyatt? A Sprite can.
The thing exploded when his buddy tossed it to him, just sprayed all over his pants. It didn’t faze him too much. As we can see, our boy is ready for action…or more rogue soda. 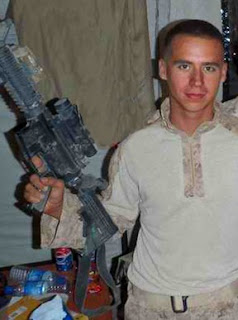 Yes sir, like so many troops (and the cast of M*A*S*H) in all the wars before him, he’s finding that - besides long, hot hours of military work - there’s not much to do in his spare time over there. So he’s amusing himself in new and interesting ways. For instance, Trigger the cat.


“I feed it my food because I don’t really get that hungry," said Wyatt.  "And it’s lazy - it sleeps all the time and steals my chair. It also likes to chase lasers and climb up the cami netting.”
It’s not only felines begging for food in Afghanistan. Each day, local children offer to fight each other, clean - or even just go away if Wyatt will hand over water or candy.

So, he gives it to them.

﻿﻿That’s my boy. And, as mentioned in my last Wyatt post, I haven’t seen him much since his toddler years. So I was super curious: In times like these, what makes a man enlist in the service?

In between taking care of work, begging kids and Trigger the cat, he answered my questions:

Why did you want to become a Marine right now, when you knew there would be a good chance you’d end up at war?

I’ve always thought we were here for the right reasons and thought that I should do my part to help, so really the thought of actually being here [Afghanistan] encouraged me to join.

Have you always wanted to be a Marine?

I’m sure you’re aware that many Americans feel that our troops shouldn’t be in Afghanistan. How do you feel about that?

I feel that we should be here; if people were terrorizing us we would want someone to help us. Also by dealing with the threat over here the chances of them causing terror on U.S. soil must be going down. The people here can’t carry out normal lives because of the Taliban; we just want them to be able to live in peace.

What do you miss the most?

This is a hard one seeing as how I miss a lot of things over here. Being deployed really makes you appreciate the little things you have and can do at home. If I had to chose one thing I would have to say my family and girlfriend, its different not being able to talk to them all the time, as I could when I was home.

What is the first thing you want to do when you get home?

The first thing I want to do when I get home is go to my house take a nice shower, eat some food with the family and just relax, not even unpack my stuff. Just relax and appreciate some of the little things that I miss.

What is the hardest part of being over there?

What are the people like? How do they treat you?

The Afghan people are normal people. Yes, some Americans would find them odd, but they have many of the same principles as we do. They have a sense of honor and hospitality; they work hard and pray five times a day. The people I have encountered have been friendly and thankful; if you give them something they always try to give you something in return.

That much is true, Wyatt. The kids and the cat are at least giving you some amusement for your trouble.

By the way? Your care package is on its way, bud. I’ll send along some candy for those kids. And some Sprite for you. (In a Wyatt-safe plastic bottle...)

If I could mail anything else to you and all the other troops over there, it would be utter and complete boredom.

Seriously. I hope you are bored to tears…all the way home.
Posted by Dawn@Lighten Up! at 4:54 PM