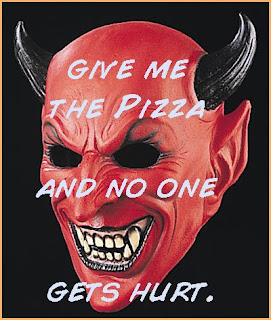 Sometimes? Bad is so good.

Yep. If it feels good, tastes great or is regularly enjoyed by Kid Rock, you can guaran-damn-tee it's bad for your health.

You know it's true. Are you eating gobs of great food? Drinking bottles of fine wine and beer? Riding fast, the wind in your hair?

Better call an insurance agent. You're probably in the process of killing yourself.

Take pizza, for instance. No, don't take it - give it all to me. Now. Don't mess with me. I am from Youngstown, after all. I know - and love - the pizza-pie.

Thick crust, gooey cheese, spicy sauce...it's late - but I don't care. The later the hour, the better it tastes.

"I will make you happy, melt your cares away," whispers the pizza. "Eat me."

Of course, it contains eleventy billion calories and grams of fat. Consumed in excess, pizza can cause clogged arteries, giant asses, or, worst of all, Kirstie Alley.

Instead, let's think about motorcycles. Helmet? We don't need no stinkin' helmet. How can you feel the wind, the air, the freedom with a big fiberglass egg on the head?

"You've been cooped up in the office all week - let's go," purrs the Harley. "Ride me."

And it's all badass,  "Born to be Wild," and bandannas.

Until the bike wrecks and the noggin slams the pavement. Wind? No wind in the hospital. Freedom? No freedom in a casket.

Bubbles tickling the throat, worries disappearing - nothing like a bottle or six at the end of a long day week.

Again, too much beer can cause situations. Like hangovers. Babies. Or - horrors! - Dancing White Folks.

Why is this? Who came up with this plan? Amazing, heady experiences that trip the trigger and surge serotonin can kill you faster than you can say 'dopamine.'

I guess that, for humans, it comes down to survival. We have to behave - somewhat. Because left to our own hedonistic devices, we'd collapse in a writhing, obese, strung-out heap.

At least, I would.

Still, it's too bad that we can't run around, always eating pizza, drinking beer and doing risky things.

They call that college. Most of us are lucky to have lived through it.

So I'll plop myself on the couch, with one maybe two glasses of wine and some bagged lettuce. Again.

Such excitement. I can hardly stand it.

They call that adulthood.

I Got Your 'Women's Work' Right 'Chere! 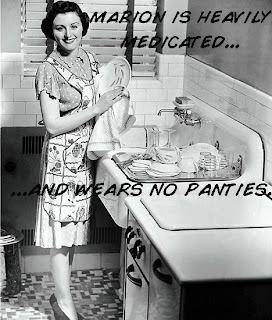 Thank goodness it's 2010. Or at least I thought it was. Judging by the crappy economy, these kids yelling ‘Mom!’ and the spiderwebs of lines on my face, we're at least ten years into the new millennium. Plus, the Internet says it’s 2010 - it must be true.

If so, then why do I still sometimes hear:

Yes, folks, believe it or not, I occasionally hear this sentence from the mouths of men.

(And then I kick them in the junk.)

They say they’re joking, they’re teasing. They say it with a gleam in their eye, then laugh, hug us and wink at their buddies across the room.

But, you know what?

Sometimes they mean it.

Sometimes they mean it when the windows need cleaned.

Sometimes they mean it when the laundry needs done.

Sometimes they mean it when a football game's on.

Now, now - I don’t mean to throw ALL dudes under the proverbial sexist bus. Guys have come a long, LONG way in the last 60 years.

And my spouse, especially, has proven that real men take on what were - not so long ago - female tasks. He's changed many a diaper. He's fed many a bottle. He's laundered many dark pants with many light shirts.

Still, my guy - and some other male friends - have 'jokingly' uttered the dreaded BTWW phrase. Laughing, eyes twinkling.

(Until I kick them in the junk.)

Gents, save your junk! Don't say it - don't even joke about it. Especially around me, the junk-kicker.

Everyone knows there’s a little bit of truth in a jest, and when a guy says "BTWW," here's the general thought pattern:

“What!? She asked me to wash windows!? That’s something my Mom did while my Dad watched football. Football…there’s a GAME on…”

Please note that, despite his junk-pain, our windows DID get cleaned recently. And not by me. Bonus? We are still married.

While my husband washed windows outside, I loaded the dishwasher and thought: If domestic chores are still women's work, then, indeed, we have gone back in time.

And suddenly, it is 2010 once again. Convenient!