What Would Erma Say? 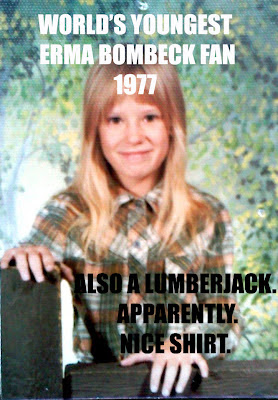 
Of course he worried. Have you met me?
I began writing the "Lighten Up!" humor column in April, 2009, the month I turned 40. The editor ran it occasionally, when he sold enough ads to make space - not an easy task in this economy. In June, 2011, the National Society of Newspaper Columnists (NSNC) gave me a third-place award for humor in newspapers under 50,000 circulation.However, with ever-dwindling ad-sales, the paper barely runs my column anymore, and with similar cash problems and ever-shrinking staffs, no other newspapers have expressed interest. The state of modern journalism (and whatever it is that I write) sometimes saddens me.But I wasn't thinking about any of this the other day when I got home. I was worried about my Doritos-scented family. And before I even unloaded my bags from the Erma conference, my husband grabbed my hand and pulled me to the bedroom.It was clear I was not going to achieve my birthday dream of taking a solo nap."Oh shee-zus honey, I am tired. Also, I'm old," I said."Shhh. . ." he said, pulling me over to the wall. There, he showed me this: 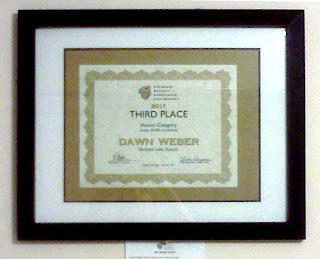 For my gift, he had framed my NSNC award. I have been so busy working and blogging and mothering and chauffeuring and possibly peri-menopause-ing-shut-up, I forgot all about the certificate. So I said:"Wow, thanks! I forgot all about this certificate!"He laughed. "I squirreled it away. Got the frame at Walmart. I hope it's OK.""Oh it's awesome. I love it," I said. He had me at 'Walmart.'He looked intently at my face, then his eyes wandered to my shoulders and chest.Oh boy. There goes my nap."What? What is it?" I asked. "I am tired, also I'm really old now."He lifted his hand and rubbed my blouse."On your shirt. . .Dorito dust. . .from Levi's face," he said.I looked down.Nacho Cheese. Perhaps Cool Ranch. Or maybe, both.Same as it ever was.

This One Time? Up Home? We Discovered the Underground Railroad. And the Soul Train. 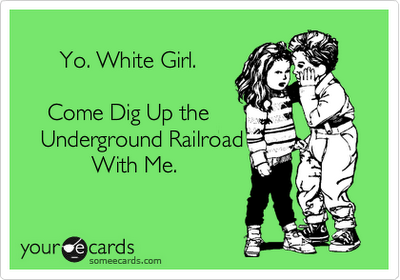 We were just kids.

But clearly, we were going to be famous.

That's because we found the Underground Railroad, back there by Mr. Nesbitt's tree.

Word around New Springfield was the famous freedom train ran through our town in the 1800s. Some said the ancient bar down the road - the Springfield Inn - had been one of its stops.

At age seven, or maybe eight, I had this all figured out. Of course I did have you met me? In my mind, a giant black steam engine - just like the cartoon at the beginning of "Soul Train" - roared and pulsed underground hundreds of miles from down South - through a giant underground tunnel - bringing the slaves North to freedom. And the Springfield Inn.

I pictured this, but really didn't give it too much thought. It was ancient history. Marshall the Neighbor Boy and I were very busy - things to do, you know. We spent a good bit of the 1970s - and probably part of the 80s - merrily and obliviously ruining the yard of our other neighbor, Mr. Nesbitt.

After the rains, around his place, we dug into all the mud we could find. We climbed each of his trees and broke the branches. We slid barefoot in the marshy puddles of his grass until we wore it to a bog.

Mr. Nesbitt watched us from his porch chair, with a PBR and a smile, but worried eyes. He didn't say much about our havoc. At the end of each week, he scooped out great handfuls of grass seed from a bag and scattered it over our paths of destruction.

Mr. Nesbitt had to scatter a lot of grass seed.

His tormented yard was where we found the Underground Railroad one summer day in 1977 or so, industriously demolishing digging around the base of his old maple tree with our mothers' garden spades. Marshall's hole was deeper than mine. This made me mad, and I was busily trying to catch up when he pulled something from the dirt.

Fascinating! Obviously, we were perched on the edge of something fantastic.

We stepped up our mining efforts. My spade hit a rotted piece of old lumber, and I tugged it from the dirt.

Marshall looked at my finding, then me, and jumped up to get his sister Shelly.

She was a few years older than us - the prettiest girl in town - and I worshipped the very flip-flops on which she flapped. I was a tiny, scrawny, raggedy little thing, but Shell never let anyone pick on me. Marshall and I consulted her on all urgent matters. Such as arguments, kickball and lunch.

On this particular day, we knew she needed to see our trash discoveries and help us figure out what trash we found. I sat holding and examining the timber and the rusty nail when she approached, with Marshall jogging up behind her.

"Look, Shell, look at this stuff," I put the garbage items in her hands. She turned the nail and the board over, held them closer to her face, and squinted at them. Then she looked at us with raised eyebrows.

"Do you guys know what this is?" she asked.

We did not. We shrugged.

"I bet you this is part of the Underground Railroad!" she said. "If you find it, you'll be famous. Mom will call the news - they'll put you on TV and in the (Youngstown) Vindicator . . ."

Marshall and I gaped at each other, simultaneously dropping our jaws. We fell to our knees and began plowing furiously at the earth. Without speaking, we knew that we would dig until we found the railroad and the tunnel. And the Soul Train.

Shelly hung around to supervise our efforts, and even helped us dig some. We found lots more rubbage things, like old, broken blue Milk of Magnesia bottles and clear liquor containers.

"The slaves probably used this stuff on the train," she told us.

Though she didn't stick around too long, Marshall and I kept mining. Wasn't easy, burrowing through tree roots, but this did not stop us from our mission. We were going to find the tunnel. And the Soul Train.

We failed to locate it that day. Exhausted and muddy - but still excited - we each went home at dusk. I relayed our discovery to my mother.

"Hey Mom. . . Mom. We found the Underground Railroad back by Mr. Nesbitt's tree!"

She looked up from the Vindicator, and gave me a slow smile. "You did? Wow. . ."

She held her smile, but quickly looked back to the paper. "Well, keep digging then."

Marshall called me on the phone that night, said his mom told him the same thing.

So the next day, we reported back for duty back at the tree. Marshall brought a bigger shovel, I still had Mom's little garden spade.

"She said she'd come out here later," he told me. And he sliced the shovel into the mud.

We dug. And dug. And then we dug some more.

The day wore on, and we worked hard, but we weren't unearthing bottles or nails anymore.  Nothing but dirt. When Marshall walked over to the tall, weedy field to pee, I made sure he wasn't looking back towards me. I put my ear to the ground to listen for the train.

This is the kind of genius I was.

Shelly didn't show up. But Marshall and I kept digging, like our moms told us to, and met up again the following day with our archeological tools, the garden spade and the coal shovel. We gave up on our deeper holes, moving all around the tree, plowing up smaller cavities.

Mr. Nesbitt was running out of grass. Fast.

We kept at it. On the third or fourth day, while Marshall and I sweated in the sun, I looked up and across the yards to see Shelly languidly hanging out on her front porch.

"Hey Shell!" I yelled. "We aren't finding much anymore - just a bunch of dirt and worms and sticks. How far down do you think this underground railroad is?"

She turned her head to me.  "Just keep digging!" she hollered back.

Huh. She wore the same slow smile as my mother did a few days before. Odd.

But one does not have time to ponder facial expressions when one is making history.

So we did as we were told. We kept digging. Missed "Happy Days," AND "Laverne and Shirley" on the TV that week. Missed the "Lawrence Welk Show," which was fine by me, but we missed Saturday morning cartoons too.

That was a shame.

We dug in the dewy morning, in the afternoon hot sun. We dug until the streetlights came on.

We dug all damn week.

But we never did find the tunnel. Or the Underground Railroad. Or the Soul Train.

Saturday night's streetlights popped on, and finally - sweaty, muddy and defeated - Marshall the Neighbor Boy and I gave up. We stood from the ground, brushed off our dirty knees and began dragging the shovels home.

Old Mr. Nesbitt, with worried eyes and a smile, put down a PBR, rose from the porch chair, picked up his bag and walked out to the maple tree.

There, he scattered great handfuls of grass seed. 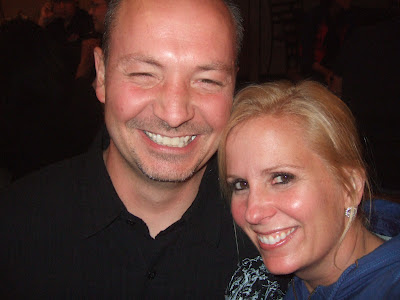 Marshall the Neighbor Boy and I, 30-plus years later. Not Famous. We tried.