My car? Needs a bikini wax.

This is because it's covered in pussy hair thanks to our two hateful, corrupt, malicious, shedding cats. They love to perch their 23 combined pounds on the fabric roof of my prized, hard-won convertible. Every damn day.

They've made it their personal landing strip.

Evil garage-dwelling felines. I think they're secretly mocking me. Probably trying to kill me. Blood pressure rises every time I see those Fat Fuzzies on the fragile frame canvas. Shooting pains in my left arm, pounding vein in the temple...

"Get Off!" I yell from the doorway.

"GET OFF!" I yell, stepping into garage.

Now, I realize that in the whole war-torn, general cluster-f*ck state of the planet, the hair-mobile isn't a crucial topic.

Important issues: You're still at the wrong blog.

All I know is that I scrimped, saved and waited 40 years to buy this little old 2003, Craigslist-purchased ragtop. I will not have the Fuzzball Farts using it as their hammock-hair-removal-system.

So I started coming up with plans to keep them off the roof.

Sometimes, I have some really great brainstorms.

And other times I should just lie down until those storms blow on through.

Exhibit A: The plain blue tarp. 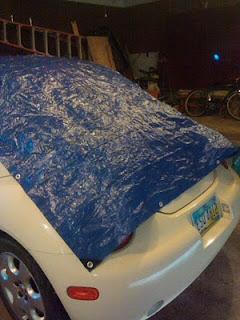 Surely, I thought, this cold plastic would render the roof uncomfortable for Furball Fairies. Surely the crinkly sound would annoy Prudent Pusses.

"Not so!" said the Comfy Kitties, perched on top of blue tarp, their effing fur finding its way back underneath to canvas car top.

Exhibit B: The same plain blue tarp with glued on mothballs. 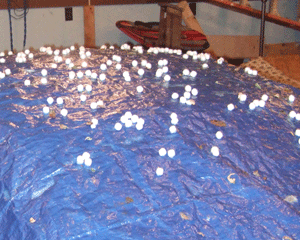 Hearing that cats dislike mothballs, I painstakingly glued two entire boxes to the blue tarp. This apparently produced the fume "Methyl-Ethyl-Deathyl-ate." Or "Ethel" for short.

It smelled like old ladies. And death. The Mothball Tarp kept the cats off the car, alright, but its fumes also made everyone ill. Ethel the Toxic Cloud seeped from the garage throughout the entire house, and though I got rid of it two weeks ago, I still smell it.

Which brings us to... 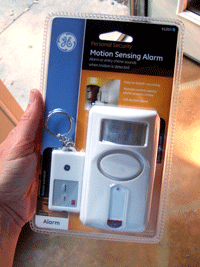 That's right - I've gone high-tech on their asses. This is no box 'o mothballs. Actual coin was spent on this fine $19.99 GE appliance.

This alarm will go on the top of the car. And when those two decide it's hair-hammock time, the LASER beam will sense their motion, and emit an ear-splitting 120-decibel alarm! The Fuzz-Festers will flee the crime scene!

Oh, yes. I have high hopes for this technology. It better work.

Because the husband is not a fan of the Pussy Princesses. He frequently volunteers to get rid of their Hairy Highnesses, and I sure don't want that to happen.


(A re-post, because, in the words of Clark Griswold, "I'M ON VACATION!!!" but I didn't want to deny you the chance to once again read about pussy hair.
Also, it's two years later, the cats are now 100 years old but still manage to haul their ancient asses up to the Beetle roof. And the $19.99 alarm system doesn't function anymore. Of course it doesn't.
Free to ANY home: 2 elderly, evil, shedding cats. And one broken alarm system.) 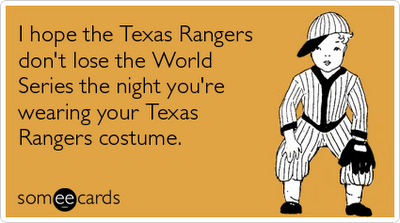 
You pull your polyester pants up to your bony rib cage.
You tuck your blue shirt down to your skinny thighs.And you yank your dark socks all the way past your knobby, funny-looking, lily-white knees.Clearly, you could use some help dressing yourself, because you look like an 83-year-old retired used car salesman. From Scranton.But you're a Texas Ranger. A Glenford-Ohio-Spurgeon-Financial-Services-Texas-Ranger, that is - nine years old. And it's time to go."I'm ready!" you yell.The hell you are, son."Monkey - come here. Let me fix those pants," I say, wrangling your uniform. "Why'd you wear the dirty ones? I washed the other pair! And where are your spikes?"I get a shrug, an "I don't know, Moth-errr!" and 2.5 minutes of unrepentant wriggling. Then you scramble around, locating your balls haha, bag double haha, shoes and Gatorade before we rush out the door to the car.When we get to the baseball diamond, you run to the dugout. I climb the steps and park myself alongside several other 30- and 40-something females, my fellow Texas Ranger mommies, and - glancing around at all of us - I decide we look pretty good. We definitely do NOT have the, how you say, "Middle Age Spread."No, we have Bleacher Butt.Indeed, the circumference of our behinds and thighs relate directly to the amount of hours, nay, years our rear-ends and gams have spent on these metal stands. The dimples, the dents on our legs? Not cellulite and not fat - merely the imprint of seats surely designed by Satan. Yes, modern metal bleachers are uncomfortable, backless, torturous affairs, hotter than the core of the sun in spring/summer, colder than a polar bear pecker in fall/winter.It's 91 degrees and humid this evening, so I eyeball another woman's Flavor-Ice popsicle, and - since it's also Friday -  I tell her that it would taste much better with a shot of coconut rum poured in its little tube. Then all the moms launch into an elaborate scheme to sneak various forms of alcohol into the next Friday night game. We're kidding, of course. Kind of. Not really.Mothers of the Year, that's us.The prospect of hooch-smuggling really gets us going. Like a bunch of clucking hens, we start several conversations at once, discussing cocktail recipes, coupons and the Target clearance rack. I like cocktails. I like coupons. I like the Target clearance rack. So my mouth is flapping at full speed, giving the girls the benefit of my vast expertise on these topics, and then all of a sudden . . .. . . you're up at bat.Got your dirty pants pulled up to your rib cage, your shirt tucked down to your skinny thighs, and your socks yanked up to your knobby knees. Again.I barely notice, though, because my heart begins to throb in my throat, my hands grow clammy and I focus on you like a laser."Keep your eye on the ball, Levi, just like we practiced!" I yell.You're thrilled to hear my advice. It elicits an annoyed sideways glance, but you don't change your stance. Your eyes are on the ball. Like we practiced.He pitches.You wait. You watch it go by."Ball one!" says the ump.The other moms shout "Good eye, Levi!" and continue their cocktail/coupon/Target chatter. Not me. Beads of sweat form on my forehead. I clench all major muscle groups, up to and including my Bleacher Butt.Tell me: Where is the coconut rum when you need it?He pitches again.You swing."Strike one!""That's alright - good swing, Levi!" yell the mothers, turning back to their conversations. Look at them. They don't have a care in the world, these other Glenford-Ohio-Spurgeon-Financial-Services-Texas-Ranger-moms whose sons aren't yet at bat. I am quite jealous. It's a good thing they're cheering for my kid.There I sit. More sweat. More clench. No rum.You wait. Eye on the ball. He pitches.You swing."Strike two!"Crap. I rub my face, lean forward and put my elbows on my legs. I can feel my blood pressure rising higher, faster. You step back, take some practice swings, return to the plate.He pitches.*CRACKKK*The baseball flies up, bounces twice, then rolls 15 feet or so past second base, to the outfield."Run, Levi!" holler the moms.Now my eyes bulge and throb to the beat of the pulse in my temple, and I yell with all my might, as if it will help, as if it will get you there faster."RunLeviRunRunRunRUNNNN!"Outfielders scramble for the ball, while you pitch forward with the flapping arms and loopy gait that your sister loves to mock. The center-fielder lobs the ball to the second baseman, he catches, turns and throws it to first and . . .*SLAP*
!
!
!
!
!
!Your foot lands."Safe!"I un-clench. Everything.You made it. Barely. You overrun the base and circle back to crouch at first. Dirty pants pulled up to your rib cage. Shirt tucked down to your thighs. Socks yanked to your knobby knees.Son, I tell you what: You can't dress yourself worth a shit.But you're doing alright in baseball, improving all the time. I can tell you'll be a pretty decent player someday. Or a damn fine retired used-car salesmen. From Scranton.Next batter up, and thankfully it's some other Texas Ranger mom's turn in the hot seat, although you're not out of the woods yet. Still have three more bases to round to get home.And so I re-clench. Everything. My pulse picks up, my eyes throb and my temples ache. I sincerely hope that - somewhere inside the concession stand - there's a defibrillator.Or at least a bottle of coconut rum.
Posted by Dawn@Lighten Up! at 4:47 AM 29 comments: