If you know how those three things go together, well, I’m sorry, because it means you read my book, I Love You. Now Go Away. Absolute tens of people bought ILYNGA, and I’m ever so grateful. I had a blast writing it and even more fun getting comments, texts and emails from people who read my sordid tales. I enjoyed the whole process so much, in fact, that I’ve decided to do it again.


So if you like reading about balls, bad beer and boobs getting in the way of golf . . . well then, again - that was my last book. But I’ll have something similar for you soon! I’m thinking in about a year.


The bad news is I won’t be around here, on my blog, as much as I’d like to because there’s only so much “funny” in me. I'm very limited on the funny! You're already aware of this if you’ve met me. I am very disappointing in person.


I know, I know - I already took a two-year break from blogging. I miss it because I love reading the comments and, hopefully, making my friends laugh a little.


But if I’m blogging my material, then there’s nothing left in me for a book. And I’d really like to leave behind some tangible things when my time on earth is up someday. I don’t want to leave behind a bunch of web pages for Google to delete eventually! I’d much rather leave behind books - for somebody to throw away eventually.


Oh well. You get my point.


Anyway, please stick with me! I’ll have something for you - relatively soon.


As with my last book, my plan is to post snippets here from
time to time from the upcoming book. Here is a bit from the
chapter tentatively titled “Big Dog/Bad Idea.”


Missy tilted her head to the left.


Missy tilted her head to the right.


And so we have another dog. 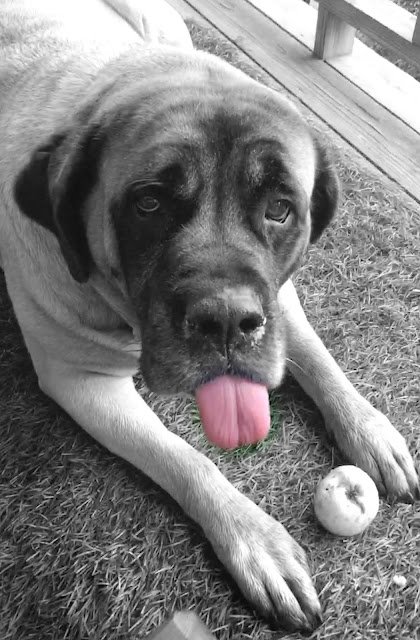 He was happy on our wedding day.

He was elated when the kids were born.

He was overjoyed when the Princess graduated from high school.

But nothing -- I repeat, nothing -- thrills my brave, strong husband like a nice long night of . . .

I suppose I should clarify here. The dinner theater to which I refer is an equine, sword and testosterone-ridden affair known as Medieval Times in Myrtle Beach, South Carolina. It offers stunning visuals! It's filled with beautiful horses! It features amazingly talented performers!

It is not my thing at all!

Part of the reason is the horses, because horses and I don't mix. I've ridden exactly five times in my life, and of those five, I've been thrown three.

The first time, at age 12, a green-broke horse gleefully launched me onto a jagged tree stump, whereupon I received a four-inch gash on my back. I should have had it stitched up, but I neglected to tell anyone because I wasn't supposed to be riding in the first place. So, in all my 12-year-old wisdom, I bled and suffered for months in silence rather than risk telling my mother.

As you can see, I was brilliant.

As you can imagine, I still have a huge scar.

The other two horses that threw me were similar  assholes, one of whom broke my nose. So yes, I avoid horses except to gaze upon them.

From a very far distance.

Which leads us back to Medieval Times.

During our recent vacation, the Husband wanted -- nay (neigh) demanded -- to go. We've been there twice before, and though it makes him so happy, I wasn't looking forward to attending again because I remembered it as a loud, crowded, horse-intensive affair with, worst of all, absolutely no alcohol.

I know, I know -- some of you might say You don't need alcohol to have a good time!

To which I would reply, Of course you do! Especially when there are horses around!

Luckily, I remembered wrong about the hooch, because one of the first things we saw upon arriving at Medieval Times was a very large, very overpriced bar. I put a second mortgage on the house real quick so I could buy a beer, then the Husband, the Hobo and I settled in our seats for the show.

Oh, he could barely contain himself. This is a man who will randomly shout "MEDIEVALLL TIMESSS!" while getting dressed for work in the morning. The Hobo also enjoys it, which makes sense given his love of swords, dirt and all things violent.

Out came the performers and the damn horses. Jousting! Dust! Way more testosterone than necessary!

As we watched, I brought up the fact that it surprises me the Husband enjoys le theatre so. I mean, there were grown men in tights and what appeared to be miniskirts.

"I can't believe you like this stuff," I told him. "It seems a little too Renaissance
fair--y for you."

Smiling, never removing his eyes from the arena, he shook his head. "Well the Guys At Work say Renaissance fairs are cool!"

Ah, the TGAWs. That explains it.

You remember the TGAWs, yes? It's been years since I've written about them, but as you'll recall, Jesus had his disciples, the president has his advisers, and my husband has The Guys At Work. Aristotle? Ha. Socrates? Scoff. Who needs them when we have the astute counsel of Mark, Biff, Bob and Other Bob.

They. Know. Everything. And as a wife, I. Know. Nothing.

The show continued, and I feigned enthusiasm as best I could. But since I couldn't match the boys' unrestrained happiness, I decided to take a quick restroom break and avoid horses. I arose, climbed the stairs, stepped into the colorful, castle-themed lobby, and it was there I beheld something wonderful:

Another bar. And another bar only meant one thing:

That's right. I could stay at this second bar, take out a third mortgage on the house, and slowly sip a beer in the quiet, nearly deserted lobby with no dust, no swords and absolutely no horses whatsoever.

Anticipating peace, free time and maybe a nice summer shandy, I walked slowly toward the second bar. I reached back, unzipped my purse and grabbed some cash. And that's when I saw it.

A Medieval Times t-shirt. In the Husband's size.

Most of you know me pretty well, so you will probably guess at what I chose.

And you would probably be wrong because I bought the damn t-shirt. Plus a mug to go with it.

No peace, no quiet, no more beer for me. I paid for the items and ambled back into the theater where the horses raced, the swords clashed and the boys sat waiting, watching . . .

Snoop Dogg and the Collapsing Cubicle

My Buddy Al has dreams.

You remember Al, my Youngstown pal, he of the Day of Three Burritos. My co-worker, my friend, and the man who advises us all to never, ever - under any circumstances - wait in line with the dummies.

Eating pie and tearing things up.

Al didn't tell me about his dream right away - I heard it on a lunch break one day from our co-worker, Shereen.

"Tell her about Snoop Dogg!" she said.

Intrigued, I turned to Al. "What does she mean 'Snoop Dogg?'"

He regarded me briefly from his fun-size bag of potato chips. "Snoop Dogg was here."

He grabbed a napkin, wiped his face and placed the chip bag on the table.

Things are serious when Al puts down his chips.

He leaned forward. "So, I dreamed I was in my cubicle, right?"

"I was sitting here working," he said, "and Snoop Dogg came flying around the corner!"

"No," Al shook his head. "He started yelling at me and tearing down my pod walls."

"Are you sure it was Snoop Dogg?" I asked. "That doesn't sound like him. All that weed - he seems like such an amiable guy."

"No way," he said. "He was acting all crazy, so I hid under my desk. He just kept eating pie, yelling 'Ra-ZIZZO! Ra-ZIZZO !' and tearing down my cubicle."

"Then the walls fell on me," he said, "I was trapped between them and my desk. And he's over there eating pie and yelling."

He shrugged, leaned back and picked up his chips, clearly done with the matter. "Who knows?"

Break over, I walked back to my cubicle where there were, sadly, no chips, rappers or bakery products whatsoever, and pondered Al's dream. What could it mean, the collapsing cubicle, the famous celebrity, the random pastry?  Did Al envy Snoop's lavish lifestyle? Did he feel trapped at his desk sometimes?

Holy Hostess cupcakes - was he lacking in sugary snacks?

I haven't seen many episodes, but I'm sure Snoop Dogg has made desserts on VH1's "Martha and Snoop's Dinner Party." And I'm sure he did it in his usual laid-back, sleepy-stoner way. I just can't imagine Snoop being aggressive about anything these days - especially pie - which makes it even more odd that he antagonized Al in this fashion. I mean, not only did he tear down his cubicle, he yelled at him.

And then went on to eat the man's snack.

In the end, the whole thing probably meant nothing. Just a bunch of chemicals coursing through a man's brain overnight, reminding him of things he might have seen that day. Cubicles. Snoop Dogg. Pie. I guess there's really no point in worrying about it.

After all, I don't want to ruin Al's dreams. 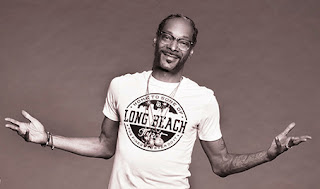