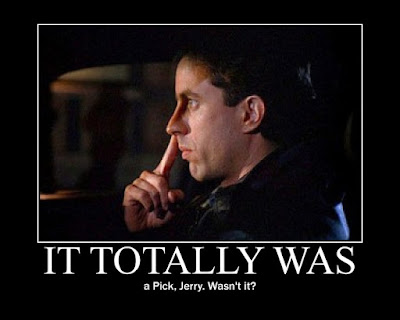 
You're probably expecting Thoughtful Journalistic Pieces from me now...since I'm still a big, fat nobody finalist and whatnot. But I didn't get this far by thinking. No sir.


Intelligence: You're at the wrong blog.


Anyway, I am busy this week, planning a camping trip with old friends, where we will do Very Important Things. Such as sit around a fire, tube down the river and drink beer.


Remember the "Real Men of Genius" Bud Light commercials? Muffy and I find them useful for many situations especially the situation called Muffy's brother...


Today We Salute You, Mr. Interstate Booger-Picker.
(Mr. Interstate Booger Picker!)
In broad daylight,  one hand on the wheel, the other knuckle-deep in the noggin.
(Pick yourself a winner!)
There in the car, you feel invisible. You pick and flick and pick some more.
(Flick it out the window!)
Tissue? You don't need no stinkin' tissue.
(Tissues are for pussies!)
Yes, you may cause nausea in rush-hour traffic, but you arrive at work snot-free.
(Let's shake hands!)
So crack open an ice cold Bud Light, O' Man of Mobile Mucus...Because anyone can use a hanky, but only rock-stars like you have balls enough to dig for green gold - in full public view.
(Mr. Interstate Booger Picker!)

Lest you don't know where Muffy and my genius idea originates, see below.
Posted by Dawn@Lighten Up! at 2:36 AM 32 comments: 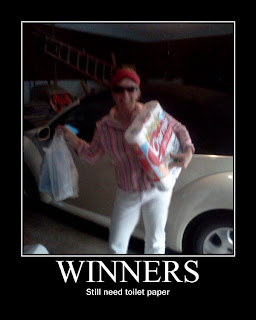 Well! Slap me sideways and call me Charlie.

Sheen, that is. Because I am winning, ya'all!

I just found out that I'm a finalist in the National Society of Newspaper Columnists 2011 contest (Humor, under 50,000 circulation) for my "Lighten Up" newspaper column in the Buckeye Lake Beacon. This means I've either won first, second or third. How ya like me now?

Yep. Tuesday began like any other day- wake, kids, dummies in traffic, whatnot. Pounded away at my job, attended three boring meetings...at the end of the day I decided to read all my Very Important E-mail:

You can see here why I check my e-mail about once a week. Delete, delete, delete some more.

My finger poised over the DEL key, one entry caught my eye:

"Congratulations,"  Oh boy, I thought - more Nigerian Lottery. Great. My finger descended on the button until...

"After lengthy review, the Judges of the National Society of Newspaper Columnists annual conference have selected your entry as one of the finalists in category D: Humor in newspapers under 50,000 circulation. This means you have placed first, second or third in the category."

And then it went black.

I cannot believe it. I just can't. People, NSNC is Serious Shizzle! A Society  full of Very Important Past and Present folks: Heloise, Andy Rooney, the late Mike Harden, my buddy Jerry Zezima. Art Buchwald is in their Hall of Fame. Dave Barry was a past speaker at their conference.

Do these fine journalists at NSNC really want to include me? I mean, I cuss. Proudly and often, I shop at Walmart. I have been known to accidentally drink beer that is popular with crackheads. ("Steel Reserve" brand beer. Shut up. With the "Steel" title, I thought maybe it was brewed in my hometown.That's what I get, representin' for Youngstown...)

According to this email, NSNC wants to honor me with a prize. And maybe a little cash. Bonus!

I'm not used to winning - I'm not quite sure what to do with myself. I am the world's most practiced loser:
That's just the tip of the bad luck iceberg, the things I feel comfortable discussing. And people wonder why I don't like Vegas.

Over the years, I became used to losing, to second or third place. Need an also-ran or a runner-up? I'm your girl - I'm always the proverbial bridesmaid.

Hey - that's OK with me. I'm still around, still kickin', and quite enjoying my five wee minutes of fame. It's all rainbows and unicorns up in here!

Also, you don't want to read my sad stories. I'm supposed to make you laugh. That's why I make nothing the big bucks.

So if you're looking for me around the end of June, I'll be in Detroit at the NSNC conference, busily trying to buy Dave Barry crackhead beer drinks in return for his pictures and autographs. But I'm not a stalker, Dave...*crazy eyes.* I'll find out on June 25, 2011 whether I win first, second or third prize.

Do I care where I place?

Because Charlie and I...