I flip through the bulky 63-page multilingual assembly manual. "It just says 'one screwdriver.'"

I'm on the cold cement floor of the sunroom with a book, carton, packaging, boards and several thousand screws belonging to our new piece of furniture. The husband stands over me, a skeptical frown on his face.

"Really?" he asks. "Just a screwdriver?"

At this, we double over in laughter. It ain't our first rodeo of assembling cheap furniture from a big box store. And he and I don't argue much, except when faced with some damn assembly required.

Still chuckling, he fetches a Phillips head from the junk drawer, and I begin attempting to screw shelf LL into B2 using screw J38. I twist and twist and get nowhere.

"This isn't the right size screwdriver," I tell him. "I need a bigger one."

He hoists himself from the pile of particleboard and gestures dramatically at his swimsuit area.  “Well, I got a big one for ya! Heh heh!"

Oh, how that man amuses himself.

As he heads back to the kitchen to root around, I realize that I haven't eaten anything yet today, which is very bad news for him. Because I don't get hungry, I get fungry: fucking hungry.

Ah. Behold the power of the cheese stick. It's the disappointing solution for a snack at our place. In fact, it's often the solution for breakfast. Also lunch. Sometimes dinner.

In fact, are you hungry? Well have a freakin' cheese stick. 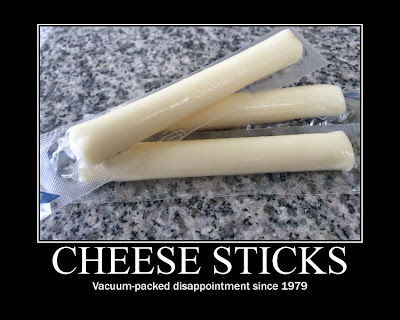 But I can't have one now -- we are out of them. My stomach growls. My head hurts.  My mouth waters. Years pass, and the husband returns with a big screwdriver, a different, even bigger screwdriver, and no cheese sticks whatsoever.

The mid-size Phillips-head does the trick, and we make some headway on our project -- for a while. Until Step 7: Screw side piece CC into shelf LL using screw B11-a. I push and wrestle with B-11-a, but try as I might, I can't get it to bite into shelf LL.

"You know," I tell him, "I think the cordless drill might work for this."

He grabs the manual and flips back through the pages. "I thought the instructions said we'd only need a screwdriver?"

I stare at him with eyes as empty as my stomach. "It does say that. Now go get the cordless drill and the Phillips bit."

He slouches his way back through the rubble. "Yes, dear."

While waiting for him, I think back to the groovy day, to the 70s and 80s, a time when furniture -- made of actual wood, mind you, by actual Americans and carried by actual delivery men -- arrived already put together. True, compared to our income, this furniture was so prohibitively expensive that my mother could only afford one piece every decade or so, but by God, it was worth it, because it was what?

I snap back to the present and glance around the room, filled to the brim with some damn assembly required items, all of it clumsily put together by my husband and I. It is a strong marriage that can survive cheap furniture.  We have been married 20 years now. That's a lot of IKEA. From the tables to the kids' beds to several large shelves, our home is chock full of "wood" fabricated in faraway countries, probably by small, hungry children.

And speaking of hungry, that reminds me . . .

Glaring, he re-enters the room with the cordless drill case in hand. He opens it up, pushes in the battery, pulls the trigger, and . . .

Nothing. As usual, the battery is dead.

He studies the dead drill in his hands. "I'll go get the electric one."

I wait for him again, growing ever older, ever angrier, ever fungrier, and study the diagram in the the instruction book. If it gets assembled, this particular piece will be a snazzy-looking television stand with a built-in electric fireplace. It was my idea to buy it.

Obviously I have had better ideas.

But this is no comfort, as I sit in a mountain of MDF, tool boxes, several thousand screws, a half dozen screwdrivers, one dead cordless drill, and exactly zero freakin' cheese sticks.

Yeah. Sure. One hour.

And one screwdriver indeed.

One-Eyed Jack and the Kayak

"Great day for kayaking," he said. "You'll fall in and freeze to death."

This from the Voice of Reason, better known as my husband. He was concerned about me, the water temperature being 49 degrees and all.

But I make it a point not to listen to the Voice of Reason.

He shrugged and helped me load the gear into the truck.

You might remember the kayak, a.k.a. My Damn Boat. Made of recycled two-liter bottles, purchased online from a big-box store, it is the only vessel the VOR would agree to, and so I bought it my damn self. It's small and inexpensive and shockingly, aggressively yellow. But it floats. Like a good two-liter bottle should.

I'd been waiting weeks -- WEEKS, I tell you -- to use it. Nothing was going to stop me, up to and including hypothermia, so I chose to sail for the first time at a friend's pond, figuring that if I fell in, it would be easier to swim to shore in a smaller body of water, before I drowned or froze to death.

Positive thinking: I gots it in spades.

Arriving at my friend's place, I pulled the kayak from the truck, then paused to glance across the pond. It looked choppy. It looked muddy. Most of all, it looked cold.

Great day for kayaking, he said. You'll fall in and freeze to death.

I pushed the boat into the water.

Except, as I soon figured out, I wasn't. Alone, that is.

Because I felt eyes on me. Dozens of pairs of eyes. And I heard something.

I headed to the far shore, drawing as close to the noise as I could.  There in the marshy weeds, I saw them, and they saw me.

Frogs. Frogs for days, frogs galore, peeping away in pairs. And oh, were they busy, dozens upon dozens of them, "upon" as in on top of each other, "upon" as in cheerfully mating and supplying the better part of Ohio's frog needs for the next year.

They didn't seem to mind, though. Usually frogs will dive right underwater upon seeing a human, however these guys and gals weren't the least bit worried about me, engaged, um, as they were.

I made my way around the shores, noting the amorous couples and naming them according to their appearance. Here were Mike and Molly, a couple of middle-aged fatties going at it on the north shore. On the west side, you had a lithe young Brittany and Kevin swimming in angry circles, their arguments turning into splashy make-up sex. Things were really swinging in the weeds of the south shore with tons of randy couples: Angelina and Brad, Will and Jada, Miranda and Blake . . . and many more, all of them getting it on in close proximity, everybody having a grand old time.

Except for One-Eyed Jack.

As his name suggests, he was a frog of one eye. There was a bump where the other eye should have been, but the eyeball itself was curiously absent, not plucked out so much as just not there -- a birth defect.

And, like so many of his one-eyed brethren in the animal kingdom, Jack wasn't having any luck in the love department. He squatted in a little cove, all by himself. Bereft. Forlorn.

Ah, but there was nothing I could do for him. So I kept going around, marveling at the ease of kayaking, and the fact that I'd made it into and around the water without getting even one foot wet.  As long as I kept my body in the vessel's middle and made no sudden moves, the boat remained stable and true.

Huh. Stay centered and still, and everything will be OK. What a concept.

I had a great day, paddling My Damn Boat by my damn self. In fact, despite the weather forecast and the dire predictions from the Voice of Reason, it had turned into a fantastic day at the pond for all of us.

Except for One-Eyed Jack. You'd think Jada, Miranda, Angelina, Molly -- hell, even Mike -- would take pity on him. You'd think some frog somewhere would give him some froggy love.

I mean, really. Those fucking frogs.

But no. It was not to be. Poor, poor One-Eyed Jack.

That guy got nothin'.