The Winds of March? Yeah. They Blow. 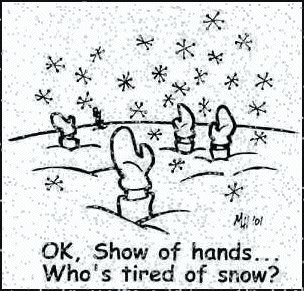 (post copyright 2010, Dawn Weber)
Giving myself a little bloggy break right now. But I didn't want to let my readers, (all ten of them! I love you guys!) down. (Also I am OCD about posting once per week). This piece first appeared in my "Lighten Up" newspaper column in the Buckeye Lake Beacon last winter. Since March still sucks, I thought I'd re-publish for your pleasure. Lucky you.

March: what a tease.

Blowing in our ears with a little warm breeze...slipping off the clouds now and then...giving us a little peek at the sun...batting the robin’s wings.

“March is my least favorite month of the year. I’m done with winter, but winter ain’t done with me.”

Think this winter’s finished with us? I’m afraid to look. Anyway, something’s wrong with my eyes: The only colors I can see are gray and white.

That’s because, last month alone, the skies dumped more than 30 inches of white stuff on our area, making it the snowiest February on record. Nationwide, it snowed or froze everywhere from Georgia to Florida to Texas.

Somebody get me a Snuggie.

The White Death. Snowmageddon. The Blizzard of 2010. The Worst! Weather! Ever!

Whatever you want to call it - enough already. First snow, then icy rain. Then, more snow. Thawed enough to cause a frigid, ankle-biting, bone-chilling crust. On top of this, guess what? Snow.

We can hack it, though. We’re Ohioans - our state color should be gray. We don’t expect rainbows and unicorns.

Fifty-five degrees one day, five inches of snow the next? Bring it on. Sunny warm breezes one hour, tornado warning the next? Scoff. What else you got? We’re Buckeyes, baby - tough nuts!

Not only has February 2010 toughened my already thick Buckeye shell, it has proven most educational. I have learned valuable lessons, such as:

Yes, it’s been an interesting February, the shortest, longest month of the year. But, sure as yellow snow, it does end. Eventually.

And the one good thing about March? It ain’t February.
Posted by Dawn@Lighten Up! at 3:30 AM 9 comments:

And The Winner Is...

Well, I'm sure none of you could sleep this week, wondering who won the Wade Rouse book “It’s All Relative: Two Families, Three Dogs, 34 Holidays, and 50 Boxes of Wine." Me either! Those were seven sleepless nights.

I was going to use one of those fancy Internet number randomizers for the drawing, but then I saw a cute kid hanging around, and I am all about child labor. So Mr. Monkey here took a break from an uber-important Mario Kart game, complaining all the while, to draw this number for my readers (all 10 of them! I love you guys!) That's authentic chocolate milk on those lips, people. You can't buy this kind of quality entertainment.

So without further adieu, the winner is... 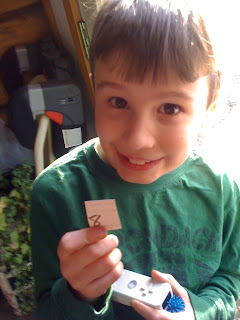 Yep! Number Eight! Numero Ocho! Which, by my count, are my bloggy/Twitter friends 2 Girls On a bench! Check out their awesome, hilarious blog here! Two Girls - e-mail me your address. You have one incredible book on the way. You'll have to take turns...now, now girls...don't fight over Wade!
Posted by Dawn@Lighten Up! at 2:09 PM 8 comments:

Email ThisBlogThis!Share to TwitterShare to FacebookShare to Pinterest
Labels: “It’s All Relative", winners 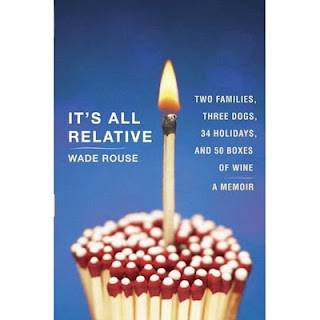 I’ve spent the past couple days walking into doors, tripping over my feet and neglecting my children.

Nothing new, but I'm more oblivious than usual. I blame author Wade Rouse. I’ve just finished his newest memoir: “It’s All Relative: Two Families, Three Dogs, 34 Holidays, and 50 Boxes of Wine" and couldn't put the damn thing down. Read the 288-page book between Tuesday and Wednesday, walking around the house glued to my e-reader like a teen girl to a cell phone.

As regular LightenUp! readers all ten of them - I love you guys! can imagine, of course I'm a huge fan of any book that begins with a prologue called “Jingle Balls," which details Rouse’s great-uncle parading around in a stuffy, crappy Santa Claus suit, complaining to his wife of too-hot testicles. What's not to love?

With that, Rouse kicks off a memoir filled with wacky, offbeat, loving craziness. He throws his front door wide open, inviting us in for his family's bungling celebrations, from childhood to present day with his partner Gary.

Have you ever dismembered a Barbie and glued her to your Valentine box ? Given your beloved a three-pack of Hanes briefs as a romantic gift? Have you ever celebrated "Swedish Day?" No?

Have you ever trick-or-treated in a rural Ozark neighborhood - skin painted black - dressed as an African tribesman? Imagined that Pez dispensers were your "little friends?" Dropped a game-winning baseball while trying to hug (and possibly kiss) your teammate? No?

And it's really no wonder, with a madcap family like his: a dad who buries Easter eggs to make the hunt "more challenging," a mom who "levitates" her son's bed to get him to sleep.

Many other authors have pimped their family foibles for humor's sake: Augusten Burroughs, Laurie Notaro and David Sedaris, *cough* Dawn Weber *cough* to name a few. What makes Rouse different?

You can almost physically feel Rouse's devotion to his family. He's sprinkled serious pieces about his partner, Gary, their dogs, and especially his (now deceased) mom, a central, grounding figure all through the work. These essays give the collection a depth and flavor not found with other authors, and I finished “It’s All Relative...” wishing I knew Rouse better - that he was in my family or circle of friends.

In fact, I met Rouse once, at the Erma Bombeck Writer’s Workshop last April. Wade walked around, hugging and talking with us, the attendees. When I thanked him for stopping and taking a picture with me, he hugged me again and said:


Wade Rouse is the author of three other memoirs (which I now have to get, because I loved this one so much. Thanks a lot, Rouse.) Fellow writers, don't miss your chance to attend Rouse's upcoming writing workshop, May 12-15 Check it out: http://www.wadeswriters.com/index.html

Be sure to leave a comment below to win a brand-new copy of “It’s All Relative: Two Families, Three Dogs, 34 Holidays, and 50 Boxes of Wine." On Sunday, Feb. 13, a winner will be randomly chosen from this post’s commenters. Please ensure I have your e-mail address so I can contact you if you win. The best way to do this is to be sure you're one of my blog followers hint-hint.

In third grade, I got my very own set of family jewels.

I am referring to earrings and necklaces here - of course I am. Don’t be pervy.

But I made an exception for Ty. Incredibly cute and sweet, he had just moved to town. Also, he had the longest, darkest, curliest eyelashes I had ever seen.

I had serious, elaborate plans of pulling them out and gluing them on my eyes, like the false eyelashes I’d seen at the drugstore.

He’d asked me to date him in customary way, via note:

Thinking how nice I’d look in his eyelashes, I circled “yes.”

And so began our romance. He attempted to talk to me, and I chased him around the schoolyard, trying to kick him in the shins. This was the usual way I expressed my affection for a boy. And I figured if I kicked Ty until he fell, I could maybe get my hands on those eyelashes.

One sunny day, I had taken a break from the kick-fest to play in the sandbox.

And there in the questionable dirt, as I squatted in my Sears Toughskins, it happened: Ty walked up and gave me his Family Jewels. In a baggie.

My grubby hands contained the most beautiful jewelry I had ever seen. Blue gems, hoop earrings, rhinestones, gold chains, rubies - Ty’s bag was just stuffed with goodies. My Mom’s jewelry box didn’t have half of this stuff. I asked him where he bought it.

I had an inkling that those things belonged to someone else. But I didn't care, because immediately the other kids flocked around, and I quite enjoyed the attention of showing off Ty’s Family Jewels. All the girls wanted his bag. However, only I was the proud recipient. This was the best day ever!

So I merrily continued flashing Ty’s jewels around. In the classroom, at second recess, on the bus. The only people I didn’t show? The teachers. I had a sneaking suspicion they might take my stash away.

I also wondered if I’d have to give the jewels back after I plucked Ty’s eyelashes out, as this was sure to cause pain and make him cry. It was a risk I was willing to take. Those were some serious eyelashes.

Home from school that evening, I had forgotten about the baggie. (It was, after all, a “Happy Days” night.) While I watched TV, Mom went through my school work - as always - and of course she found it.

“Dawn Lynn, WHAT is THIS?” she asked.

Uh-oh. The middle name. Trouble. I spilled the story, playing innocent, like I had no suspicions of anything but Ty spending his own hard-earned allowance to buy the jewelry. But even though I was young, I was still a female - I knew good pieces when I saw them. I also knew the average 1978 allowance could not purchase rubies and gold chains.

My Mom quickly looked up Ty’s phone number, called, and told his mother what she had found.

His mom was relieved. You see, her jewelry box had mysteriously emptied that week, with no signs of a burglar anywhere else in the house, and no one admitting anything.

The next day at school, I gave him back his Family Jewels - in his bag.

Then, knowing me, I probably kicked him in the shins, and went for his eyelashes.

I never could grab them - he was a fast little jewel thief.

Ty grew up and became a phenomenal guy with still phenomenal eyelashes. He's a husband, a father, a coach and businessman extraordinaire, who owns his own insurance agency. Contact him for all your insurance needs.

Do not see him for your jewelry needs. His days as a family felon are over.

To finish this story, I had to e-mail my buddy Ty and ask him some questions about the incident, and he sent his side of  it back to me. Adorable:

1. Totally fine to use the story. 2. graduated 88. 3. Yes right after I moved there and I was in 2nd grade so 8? 4. Yes your mom was the B word that screwed my whole plan of gettin naked with you in the sandbox. 5. U were going with me and that’s why I gave the jewels. 6. I am sick individual to remember like it was yesterday or maybe you are the only one that got away LOL I threw the rest of the woman away on my own terms. 7. Yes she went into her jewelry box to get some earrings and I cleaned the whole damn box out LOL. She then interviewed everyone in the house and of course I denied everything and then your lovely mother made a call. Don’t like her very much to this day. 8. I went into her room and threw everything in a ziploc baggie like I was robbing the place LOL. 10 I put it in my lunch box and then brought it out when I got on the bus. You should have seen your face you were so happy LOL.
Posted by Dawn@Lighten Up! at 3:54 AM 11 comments: