Our House Is Haunted...By a Trucker 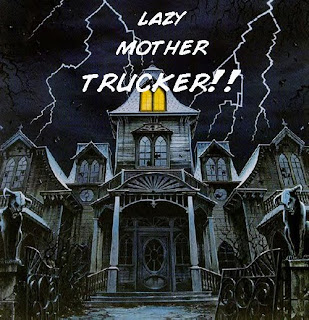 I cuss at dead people.

Not all of them, mind you - one in particular. A guy called Buck. That's not his real name. I changed it to protect the asshat guilty.

A former owner of our house, Buck was the type of guy who liked to "do it himself." This has been most unfortunate for us.

He was not a carpenter, a plumber, an electrician or a contractor. He thought he was.

In reality, he was a truck driver. We can tell.

I spend a lot of time yelling:

Luckily, I'm a tough cookie. And I watch a lot of HGTV. So of course, I know everything about home repair and remodeling. (Just ask me.)

Lately I've been using my mad television skillz to remodel the downstairs bathroom, and I was especially excited to get rid of the heinous, late 80s, Garth Brooks-era medicine cabinet and light fixture. Both are epic in their fugliness. I blame Buck.

You hear that? That's him, beyond the grave, laughing his ass off.

Because when I unscrewed the two screws holding the medicine cabinet onto the wall and gave it a tug, I got exactly...nothin'.

No movement. Not even close. Stubborn and stock-still, the Garth Brooks cabinet didn't move. I examined it all the way around, thinking I'd missed a screw, a stupid nail. Nope. I tugged again. Nothin'. The box remained, a monument to blue wooden geese and bad country music.

This reeked of Buck. Buck plus construction adhesive.

Instead of just screwing the cabinet into the wall's studs like a sane person, the village idiot our boy had chosen to slop industrial strength glue on the wall and permanently affix the Garth Brooks medicine cabinet in place for all time. Just to be evil.

1. If I ever did get it down, the drywall beneath the cabinet was probably jacked-up beyond repair.
2. It was time to drink my lunch.

I pondered my situation on break, and decided to save cabinet Cluster Buck for later and move on to the revolting light fixture.

Breaker off, I began unscrewing it, wondering what would happen next. Didn't have to wait long.

The lazy redneck had drilled a huge, jagged electrical hole on the SIDE of the fixture instead of the middle. Didn't matter to him: In 1989, his fugly light wouldn't show the hole.

Well, guess what dead dude? It's 2010, and my new, awesome light will totally show this gash. Now I have a huge hole to patch, and wiring to drag to a new location. My TV skillz will be taxed.

Who DOES this? Who puts huge electrical wiring holes on the SIDE of a fixture?

Ladies and Gents, here he is again: the Jack of No Trades, Mr. Mediocrity, the King of Half-Assery.