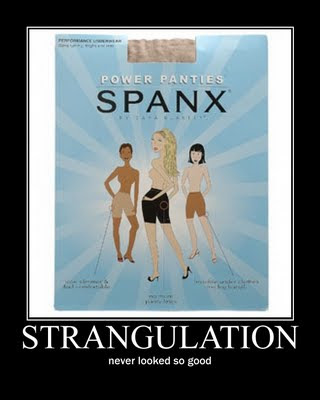 (post copyright, 2011, Dawn Weber)
Very few friends will let you into their pants.

Unless you buy them a drink first.

Lighten up, Frances. You too, Esther. Don't start writing in nasty comments about my foul mouth again. I'm saying my buddy Robin Spanxed me...all the way from Cleveland.

And I loved it.

Yep. I had quite a dilemma last week: I was up for the Humor (under 50,000 circulation) award at the National Society of Newspaper Columnists Conference in Detroit Saturday evening. I was also going on vacation the five days before this event - arguably one of the biggest nights of my life. So I needed to continue to fit into this dress, which is - amazingly enough for me - not from Walmart:

Obviously, I had two choices:
1. Eat, drink and be merry or
2. Fit into expensive, non-Walmart dress

Have you met me?

Yeah. I was merry.

Then I was worried.

What if I waddled to the podium? What if I popped a zipper on the way up? What if I burst forth from the dress like a stuffed sausage, and everyone saw my goodies?

I took my concerns to the experts - the girls on Facebook. My friend Robin, author of this hilarious blog, didn't let me down. She reminded me of Spanx.

I never thought I'd wear a girdle. To do so, in my mind, admits defeat. Although people usually don't believe it, I work out like an O.C.D. idiot.

But obviously I had a situation - a vacation situation.

The good news for me? Robin owns Spanx.

This worked to my benefit, because she gladly said she'd part with her Spanx and send it to me via Priority Mail so I'd have it in time for Saturday night.

People: A friend who loans you her intimate apparel? Who rushes said skivvies through the U.S. Postal System so you have it in time for the weekend? Keep this person close to your big belly heart. Forever.

Yes, a solution was on its way. Witness the following Facebook transaction:

The package arrived on time, but I was still kind of frightened, so I didn't open it until I was getting ready for the awards dinner. I pulled a tiny sliver of fabric from the envelope. Surely, Robin was punkin' me. It was the size and width of a snake.

I am the size and width of a heifer middle-aged mother-of-two. Who may or may not have some food issues. Who - as we discussed earlier - sometimes gets merry.

Obviously, I would need some assistance.

It took him a while to stop laughing. But eventually, we got to work. We sweated. We wrestled. We pulled. We rested. Don't be pervy! And then we sweated, wrestled and pulled some more. You perve.

Finally, we had success, and the thing was painted on my body. I looked at myself in the mirror. Gone were my hips, my twice-pregnant belly, my infernal thighs. Gone was most of my womanhood.

In other words, I fit today's beauty standard. Perfectly.

Thanks to the girdle, we were running late, so I pulled on my dress and we rushed out the door.

Walking in Spanx is like continual resistance training. It's like 39,000 rubber bands, wrapped stubbornly, and somewhat painfully, around your body.

It's like the slow, methodical strangulation of a boa constrictor.

But I'll tell you what - it worked. Despite my week of vacation partaking, I looked OK in the little black dress. And the butterflies in my stomach? Gone. Smothered and smashed, no doubt, by the boa constrictor Spanx.

Just as I predicted, the National Society of Newspaper Columnists awarded me and Robin's Spanx third place. Not bad at all - this-here girdled-gal has only written humor for two years.

I may have placed third, but I felt like a Grand Champion. Because walking - not waddling - to the stage to get my award, I did not pop a zipper. I did not burst forth from the dress like a stuffed sausage.

And no one - not even one person - saw my goodies.

That, my friends, is what I call a raging success.

Real Men of Genius: Lighten Up! Edition. The Sequel. And the Other Sequel 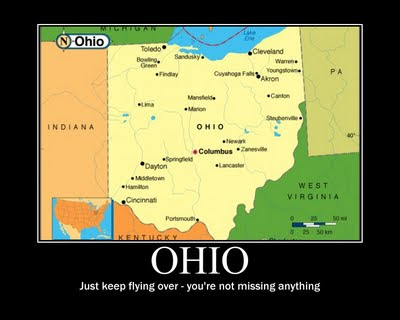 Not very nice of me, is it? Sorry. I love Ohio's people. But its steadfast refusal to offer me A: Much sunlight B: An ocean or C: Anything exciting at all makes me, well, downright postal at times.

I was born for the beach. Surfing all day, slinging cocktails and BS all night for tips.

But no one got this memo. I have somehow managed to live here all my ever-lovin' life.

I'm not going to dwell on Blow-Hio today. No sir. Because I'm outta here, folks! That's right. This here funny little white girl is headed to the beach!

I'm not telling you exactly where I'm going. Or when. Or how long I'll be gone. You could be a crackhead, for all I know. Taking a break from smokin' the rocks to read my blog, then break into my house to steal my vintage Fisher Price Little Peoples.

Oh you know you want them. Everybody wants them. *Crazy Eyes.*

Remember the rule: You toucha my Peoples, I breaka you face! And you better not try to burgle me, ya bunch of heathens. Our house is protected by a pack of...large wolves. Yeah, that's right. And gangstas.

And maybe the Devil himself.

Even though you could be a gaggle of crackheads, you are my dear readers. All nine of you! I love you guys! Also, as I mentioned a hundred times before, I am OCD about posting once a week. Hence, I give you not one but TWO! TWO! TWO! mini-posts this week.

See that? Even on vacation, I just give and give.

I've decided to write more pieces about about Folks Who Irritate My Balls. You know, if I had Balls.

Like the guy who ruins my coffee breaks at the Quicky Sack because he takes for-freakin'-ever! to buy his 23 scratch-off lottery tickets.

And, for added ball-irritation, I've also thrown in a piece on the well-documented dude with the saggy, baggy pants.

Thanks to nineteen never-ending My-God-When-Can-I-Retire!  years in communications, I know the best format for Folks Who'd Irritate My Balls If I Had Balls. We shall put it in the Real Men of Genius: Lighten Up! Edition series, inspired by the lovely Muffy. Because I've found, in life, that most things can be improved with a beer commercial.

Read on, ya bunch of  thugs. ;) I'll be back when I'm happy and relaxed. (Have you met my Type-A ass? You may never hear from me again.)

Email ThisBlogThis!Share to TwitterShare to FacebookShare to Pinterest
Labels: General B.S., People Who Irritate My Balls If I Had Balls, Real Men of Genius 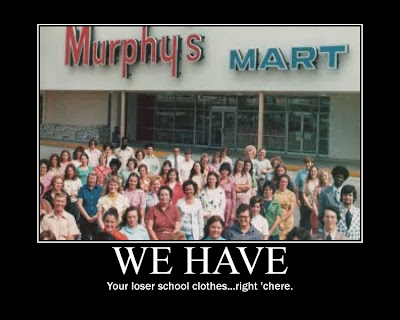 (copyright 2011, Dawn Weber. Thanks to my old-school friends Mike McAndrew and Sarah Lowrey for giving me the idea to write about this oh-so-important topic!)


You may not know this from my current high-falutin', Applebee's eatin' lifestyle, but I was born a poor kid.

Yeah, I said it. I'm putting it out there in front of God, Google and everybody: We were broke.

And I'm talking poor, as in, during non-pay weeks? Boiled hot dogs for dinner. All week long.

Let me repeat that, so it sinks in: DISCOUNT STORES FOR MY SCHOOL CLOTHES.

The horror. My face turns red just thinking about it.

I know, I know. I was lucky to have clothes. Kids, probably without clothes, were starving in Africa.

But I wasn't worried about them. My great and urgent concern was that my little ass didn't sport a "Levi's" tag, like so many of my classmates.

You see, Hill's, Murphy's, KMart, Fisher's Big Wheel, etc.? They didn't carry Levi's, Gloria Vanderbilt, Sasson, Jordache, or any other horribly overpriced very essential brand. They were only available at the mall.

And my mother was emphatically NOT going to the mall.

"I'm NOT going to that MALL! Too damn expensive," she said.

Hell. I couldn't even score a pair of Sears Toughskins. Had to get those at the mall.

So I walked around cracking jokes at school, hoping no one would notice my heinously economical "Togs" and "New Friends" jeans.

"New Friends"? WTF kind of jeans are those? More like "No Friends."

Although I hated the clothes they sold, I secretly loved the discount stores. Loved wandering up and down every aisle with my mother and grandmother, avid tight-fisted K-Mart shoppers, both.

And in northeast Ohio, during the 70s and 80s, a girl of reasonable age could shop by herself in such a store, without too much fear of abduction by a pervy stranger. I'd ask permission to go on my own, then prance over to the Record Department, drunk with the freedom of it all.

Oh yeah - there's the good stuff! Fleetwood Mac, Boston, the "Saturday Night Fever" soundtrack...had to make sure to peep at the ones with the racy covers before I got caught. I'd be in deep weeds if she saw me glancing at the R.E.O. Speedwagon "Hi Infidelity" or Loverboy "Get Lucky" cover.

After a thorough ogling of the smutty albums and new-release 45s, I'd wander alone into all the other vital departments. Toys, candy, plastic swimming pools - all the junkiest junk finest money could buy.

Most stores had their own best sections. Murphy's had the choicest toy department, Woolco sold the most excellent records. For passable "Togs," I could tolerate Fisher's Big Wheel.

Those stores are all gone now, leveled or replaced by today's two measly choices : Target or Walmart.

At least you can, occasionally, buy Levi's at either place. Not that my daughter likes them - she only wants Abercrombie, Aeropostale or American Eagle jeans.

Because I am NOT going to that MALL! Too damn expensive!
Posted by Dawn@Lighten Up! at 6:31 AM 31 comments: