I Married an Amish Dude. Apparently 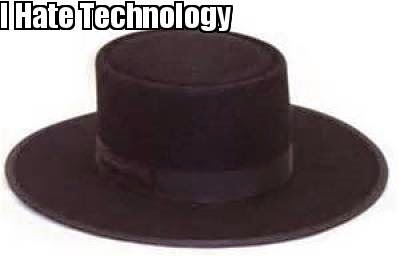 The husband's phone has broken. I'm beside myself with joy.

This means I can engage in two of my favorite pastimes: 1) shopping; and 2) looking at new phones.

I love cell phones. Actually, love may not be a strong enough word - I fantasize, lust and drool over them. Androids, iPhones, Blackberries, Windows, doesn't matter; I fondle and ogle all of them in equal measure. Over the past five years, I've owned no less than nine handsets because I cannot commit to a single model. There's always one out there with more to offer, and I simply won't be tied down.

I am the Elizabeth Taylor of smartphones.

The husband, however, is not a fan of phones, shopping or modern technology in general. Still, he seems pretty upset at the loss of his device, and he hands it to me in the kitchen with a helpless look in his eye.
“What do you think is wrong with it?” he asks.

I punch around in vain on the flickering display. “Looks like your screen's shorted out, which means it’s breaking,” I tell him. "It’ll be completely dead soon.”

I’d bought him this, his first smartphone, on clearance for next to nothing not because I'm cheap - though I am - but because it was the only model offered with a slide-out keyboard, which Mr. Amish here wanted instead of a standard touchscreen keyboard. “Ack!” he said one day, punching around in vain on my iPhone. “My fingers are too fat! Where’s my slider?”

So, yes. The thought of getting a $40 phone repaired makes me smile. ”I’ll run to Target and get you a new one,” I tell him, handing him his failing Android.

Oh, here we go. I forgot how much he loved his crappy Obama phone; I could barely pry that raggedy thing out of his hands.

“No, you can’t use your flip phone,” I tell him. “Your phone company doesn’t support it anymore. Anyway, you have UNLIMITED DATA!”

I pause, so the magnitude of this can sink in. I do not have unlimited data, and my jealousy is palpable. “Do you even know how valuable that is? It’s like a gift from God!”

“It means ‘internet.’” I tell him. “You have UNLIMITED INTERNET on your phone, unlike the rest of the free world. We’re all paying through the nose for even a few gigs of limited internet every month. You could stream Pandora constantly, if you wanted. I mean, you could watch Netflix! Like, all day long!”

At this, I have to sit down. I’m starting to swoon.

He pockets his failing device, and sits beside me at the kitchen table.

“I don’t have time for that," he says, shrugging. "Don’t get me anything complicated - I don't like all this fancy new stuff. I’m just a regular guy.”

"Yep - the same old things are good enough for me." He reaches as if to take my hand, then sees an opportunity and slides around my arm for a quick boob-grab.  "Anyway, you should be glad I don't like change."

And he smiles then, because he knows he's right.

I hate when that happens.

Hey! You! Get Off of My Couch! 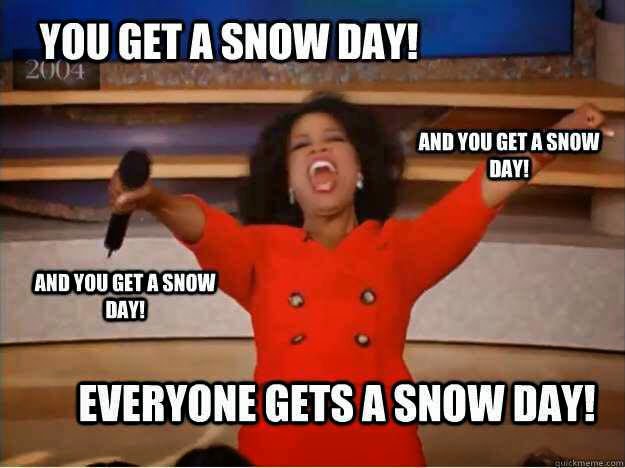 Cold outside? Too dang bad. Go to school.

You'll have to excuse me, folks, my inner Archie Bunker has reared his head. The kids have been off school since, oh, 1999 or so, thanks to a combination of Christmas break, snow and these newfangled "cold weather days," wherein school is canceled due to low temperatures.

It's not just my kids missing classes lately because of frigid temps; judging by posts from Facebook friends, the cold-weather cancel is now a statewide, nationwide thing. Still, I'm not sure quite when "It's cold outside" became a valid excuse to stay home. It wasn't when I was young.

In fact, NOTHING was an excuse to stay home when I was young.

"Twelve below zero? How about that. Bundle up and go to school."

"You threw up? Twice? Well, are you done? Then brush your teeth and go to school."

"There's a zombie apocalypse? The whole county is under siege? Here's an ax and a 12-gauge shotgun. Now go the hell to school."

And it's good, I suppose, for children to be warm and safe at home. On the couch.

For weeks on end.

Hey. It's not like my kids are bored or anything. No, they're engaged in several valuable, educational activities, such as snacking, Twittering, and dirtying every cup in the house. Also, they now have time to explore their many and various hobbies. My son in particular has a wide array of interests, ranging all the way from "Call of Duty: Black Ops" to "Call of Duty: Modern Warfare," and he maintains a bustling schedule that includes not only a PlayStation, but also an iPod and laptop. Not to be outdone, my daughter's busy snow-day regimen includes walking - all the way from the couch in the living room . . .

Bah. I guess I'm just jealous. And annoyed. No one seems very concerned that I have to go out in this weather; there's no 5 a.m. robo-call telling me that the office is closed. Also, snow days are nothing but trouble: If I'm working, I have to find babysitting, and if I stay home with them, I have to keep my sanity. Nobody wins.

My reaction to snow days:

Well, I'd love to stay here with my afghan, laptop and coffee and continue grousing about school cancellations, but I have to work - of course I do - and anyway, it's about time for the kids to wake up.

And they'll really need this couch.
Posted by Dawn@Lighten Up! at 3:58 AM 12 comments: