Picking Up the Feathers 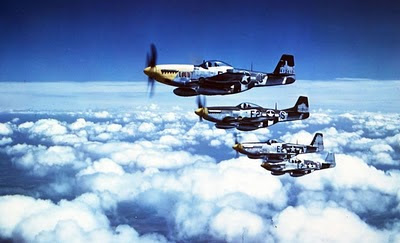 I could always tell when he was thinking about the war. It hung in his blue eyes. Faraway, like clouds. Wet, like rain.

Some were born to fly. And some are forced to pick up the feathers. So it was with my grandfather, who served in the Army Air Force during World War II. He loved planes, loved flying, and had hoped to take the skies, to lead missions. He wanted to be a hero, like in the movies.

Life is not a movie.

He served in the Army Air Force, but he was not a pilot. His main job was to sail out and recover airmen - or what was left of them - after their planes were shot down over the Pacific.

He found very few survivors. Some. But very few. I never could fathom the horrors he'd seen. I don't - I can't - call what he did picking up the pieces. I call it picking up the feathers.

I wonder how many he helped send home. How many families have closure because of what he found. I hope he knew that this was important work.

Of course, he didn't talk much about it to me, anyway - the little blonde granddaughter. He spoke only of good things: the stunning beauty of Hawaii, the unforgettable friendships, the unwavering patriotism.

The Army Air Force had told him he was too "uncoordinated" to fly, too clumsy to wield the controls of an airplane. I have always been suspicious of their judgment: He was a good driver, an experienced farmer. He was used to machines and engines.

Sometimes I wonder if the USAAF, when faced with hundreds of thousands of wannabe-pilots, didn't deem many unsuspecting men "uncoordinated." And sent them on to other, less glamorous, still necessary tasks.

But that's just my hunch. What do I know? And of course, it never, ever occurred to him to question his superiors. No one said such dishonorable things. Back then.

So he did his job. He didn't complain. A farm boy knows much of life and death and blood and guts - that's what they did. Back then.

On a three-day pass, with my grandmother, he made my mother. A good thing, too, because he promptly caught a severe case of measles in the service. No more babies would be possible after that. 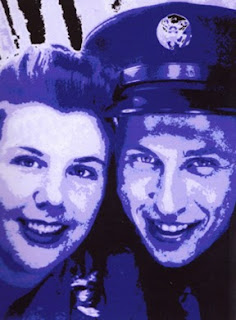 And, eventually, he came home. Unlike so many others.

In the end, maybe the USAAF was right. It's good he didn't fly, that he didn't end up as feathers in the ocean. He lived a relatively long, happy life, married 50 years to my grandmother. He helped raise me in a wonderful small town in Ohio. In 1998, he got to meet my daughter, his great-granddaughter - who is named after his wife, Laura.

Much to his great dismay, he never flew a plane.

That's fine with me. He was here. He came home.

And he was still, very much, a hero.

(This one's for him)

(a re-post on the eve of what would have been my grandfather's 92nd birthday, and my grandparent's 70th wedding anniversary.)
Posted by Dawn@Lighten Up! at 3:01 AM 35 comments: