Dear Car Beside Me: I Know Who You Are 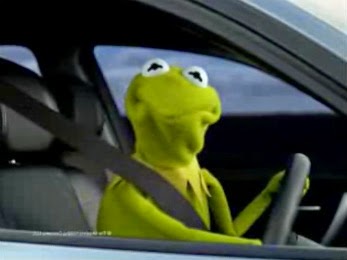 
Don't mind me. I'm just heading down the interstate, judging people based on the cars they drive. I have plenty of time for this. My commute to the office is, on a good day, one hour each way. I've worked at the same job for, oh, nine years/108 months/3,285 days. But who's counting?


Point is, I spend a lot of time in my car. There's lots of places I'd rather be. Bed comes to mind. Hell - prison comes to mind. But I must go to work. You know, to be able to afford gas and a car. So I can go to work.


Great. Now I'm depressed. I had a point here. What was it? Oh yeah. Judging people based on their material possessions. I feel better.


Anyway, over these nine years/108 months/3,285-but-who's-counting-days, I've noticed some reoccurring characteristics amongst my fellow drivers. You know, I don't like to stereotype. So let me just throw down some broad, baseless generalizations. Read on.


Economy/electric car: "Co-exist!" "Recycle!" "Change!" You're a bumper sticker billboard, maxed out in the right lane at a puttering, earth-friendly 60 m.p.h. You've likely been to a pride parade, and you're all about equal rights, world peace, legalized pot. You voted for Obama. One of your bumper stickers indicates this, but you don't need it.


Minivan: You're on the way to school and/or practice in a vehicle full of car seats and petrified french fries. You're exhausted, crabby, and flailing an arm around in the back seat, hoping to make contact with one of your wayward offspring. You gave up form for function long ago, and sold your soul for a built-in DVD player and a third-row seat. You used to be cool. But now?

You're too tired to care.


SUV  - You are also on the way to school and/or practice in a vessel full of car seats and petrified french fries, though you'd very much like us to believe otherwise, what with your off-road package and four-wheel drive - features you've never used.

SUVs: At least they aren't minivans.


Pickup truck - Gun rack, tool box, probable concealed weapon . . . you're ready for anything, up to and including the zombie apocalypse. You get 15 m.p.g. highway, but petty things like gas mileage and pollution do not concern you: Global warming is just a big conspiracy started by that liberal who invented the internet. You did NOT vote for Obama. Your bumper sticker indicates this, but you don't need it.


Sedan - Sure, your Accord/Camry/Chevy Cobalt is non-descript and boring, but you don't care. You don't care about anything, really, except getting from point A to point B, albeit with premium cup-holders and functioning airbags. You're a regular guy, just trying to get by, driving at a sensible speed in your sensible car, with your sensible shoes to your sensible . . .


Sports car/convertible - You. You're zipping in and out of lanes at 85 m.p.h., tailgating, swerving, driving with one hand and texting with the other. You're passing on the right, cutting off on the left . . . but you can do what you want, right? You've earned it - you're a wealthy, middle-aged white person.

So we see here that just by looking around on the freeway, we can tell what kind of people we're dealing with, judge them accordingly, and really give them a piece of our . . .


Reading through this, I just realized that for one reason or another, our family of three licensed drivers owns five vehicles. Do not be jealous of this; they're all about ten years old with over 100,000 miles.


But there's no getting around it. On any given day, depending on the weather, which vehicle is in the shop (and one is always in the shop), or what I'm doing after work, you could find me driving: an economy car, a pickup truck, a sedan, an SUV, or a convertible.


Which of course - go ahead, say it - makes me a hippy/redneck/boring soccer mom/entitled a-hole.


With a really small penis.

And at least they aren't minivans.
Posted by Dawn@Lighten Up! at 4:49 AM 20 comments:

"I think my skin's melting off!"

Holy crap! you say. Where are you? What's going on? Industrial accident? Ebola outbreak? Zombie apocalypse?

Nope. Do not be alarmed. It's just Monday. And that's just Tim.

I sit right next to him at work, and we've been side-by-side for so long that I can usually tell what he's doing just by the noises he makes. I can hear everything: I can hear him breathe, I can hear his stomach growl, and I spend more time with him than I do my family, which is a sorry state of affairs indeed. You've heard the terms "work family" and "work spouse," but it isn't like that at all with us. Anyway, one spouse is quite enough, thanks. I don't need anyone else pestering me for dinner, or poking around at my swimsuit areas. Tim asks for nothing - except the occasional Tums or ibuprofen.

Although I can't see him because we're behind one-inch-thick cubicle walls, I know that he's over there squinting worriedly into a little mirror he keeps at his desk to assess his many imagined ailments and conditions.

"These lights make me look all spotty!"

I grab my pencil and tablet. For amusement, I like to keep a record of Tim's pseudo-symptoms. Here is the actual list from my desk, along with - for some reason - a doodle of a pine tree. 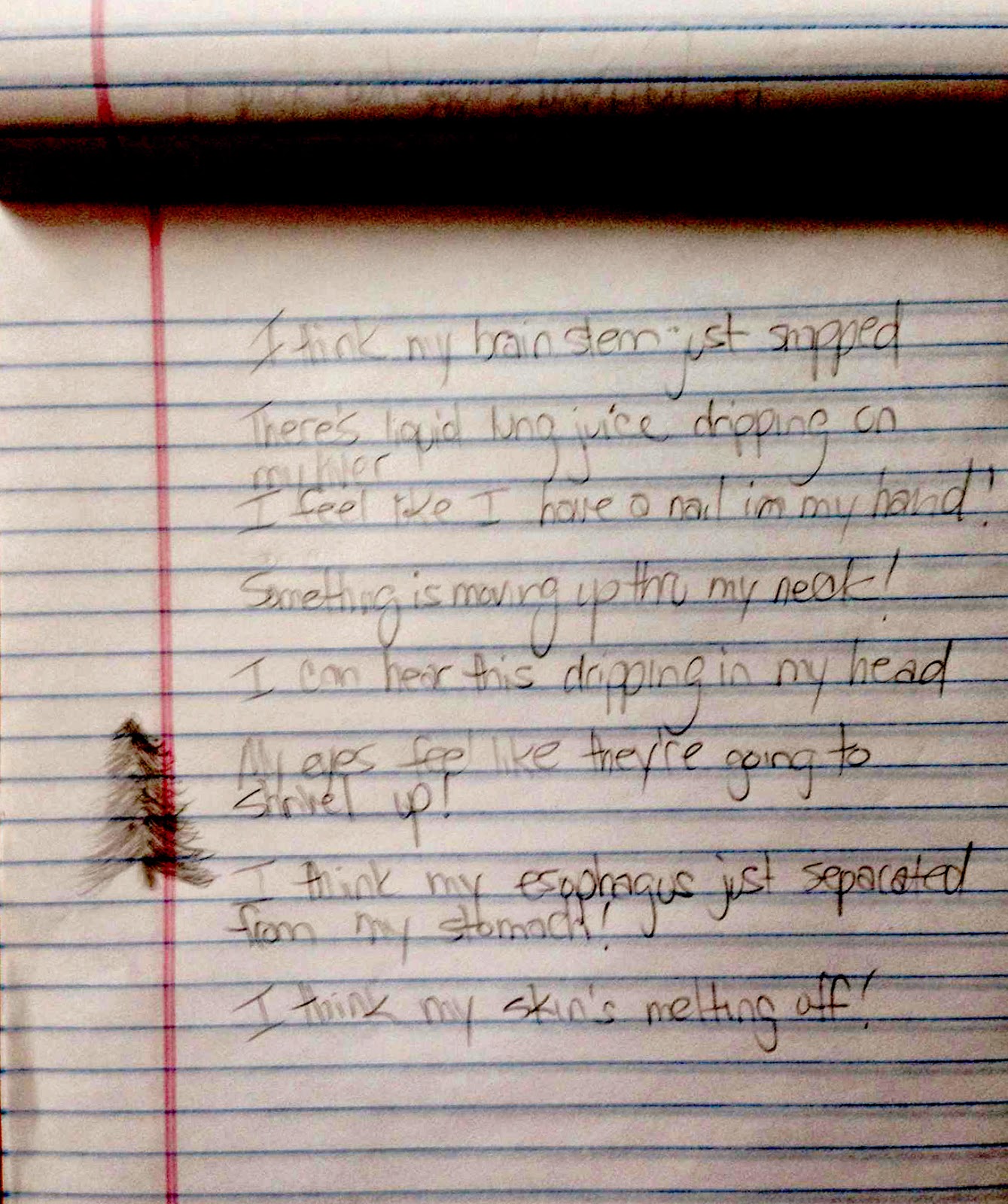 I know. I have the penmanship of a mentally challenged first-grader, don’t I? The only legible thing on that paper is the pine tree.

So allow me to transcribe for you. Below are some of Tim's Imaginary Zombie Ailments, along with handy-dandy Regular Person Translations:

IZA: "I think my brain stem just snapped!"
RPT: He has a crick in his neck.

IZA: "There's liquid lung juice dripping on my liver!"
RPT: He has gas.

IZA: "I feel like I have a nail in my hand!"
RPT: He's having a minor muscle spasm.

IZA: "Something is moving up through my neck!"
RPT: He has gas.

IZA: "I can hear this dripping in my head!"
RPT: His allergies are acting up.

IZA: "My eyes feel like they're going to shrivel up!"
RPT: He's tired.

IZA: "I think my esophagus just separated from my stomach!"
RPT: Still gas.

You might doubt the veracity of my claims. You might think I'm exaggerating about Tim, that no one could make up such whack-a-doo maladies. But I assure you: It's all true. The list doesn't lie.

I put down the tablet, rise from my chair and walk over to stand in his doorway, where I watch him frown into his Worry Mirror.

"Were you always like this?" I ask. "I mean, when you were a kid, did you sit in classrooms narrating your body's rapid and disturbing disintegration?"

"No, no," he says, shaking his head. "It's only since I've been here. This building is killing me."

He looks up from his mirror, brows raised.

You know, he may have something there. I've always said that cubicles are just glorified coffins.

And really, Tim is a very smart, apparently sane person in other ways. Plus he's super nice - always saying good morning, giving me coupons for my brand of Greek yogurt . . . I once convinced him to put a bowl of water out for some stray cats that he'd told me about, a litter of kittens living under his porch.

I mean, as far as zombies go.