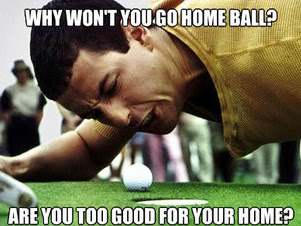 
Golf - what's not to love? You're outside, you're drinking beer, and you're around lots of happy, relaxed men - many of whom may buy more beer.

And so each spring it happens: I get the Big Idea. I really should just lie down until these ideas go away, but I never do.

No, I get it in my head that this will be The Year, the one Wherein I Learn to Play Golf.

Now, I am a middle-aged white woman with a big wide rear-end and plenty of hideous, sensible shorts. So you'd think I'd already know how to golf.

But I don't. For many decades years now, I've been engaged in the process of just learning how to hit the ball, or "drive" I guess the kids call it these days. This is much harder than it looks - for me, anyway.

So every March, I drag out my clubs, a gift the husband bought me one year after I excitedly told him my Big Idea:

He's heard many of my "I want to learn . . . " Big Ideas - drawing, painting, piano-playing, jewelry-making. Most of these I've taught myself - or completely forgotten about; all of these have left us light in the wallet and heavy on accumulated junk supplies.

So, being the smart, sweet cheap frugal man he is, when I said, "Golf!" he went out and bought me a set of clubs - at a garage sale.

And that's fine with me, because the red-and-white, 30-year-old Wilson golf bag looks cool and kind of retro, and also meets what - in my eyes - ranks as the Most Important Golf Requirement: 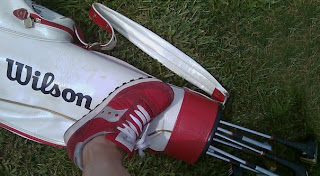 It matches my shoes.


Oh yes - golf. He bought me the cool bag and a bunch of clubs, all of which had numbers - 3, 5, 9 - that signified nothing to me, although I did recognize the putter from playing Putt-Putt. I can kick some Putt-Putt ass.


He put a tee and ball down in the grass, and began showing me how to hit the ball, or "drive" as the kids call it these days. He taught me how to grip the club, and he demonstrated the swing, the "all in the hips," then he set me up and came up behind me to lead my body through a swing, whereupon he faux-humped me and I punched him in the nuts. Lesson over.

His obssessive faux-humping is a chapter unto itself . . .


(Stay tuned! This is an excerpt from my upcoming book, and you'll want to read the rest because it contains boobs.
No, not PICTURES of boobs, you perv.
Just boobs.
No, not pictures!)

Like so many folks, I am a fan of things that can be done without pants.

I refer, of course, to napping. What did you think I meant?

I'm certainly not alone - even the great Sir Winston Churchill was a strong believer in the art of the apparently naked midday rest:

"You must sleep some time between lunch and dinner, and no half-way measures. Take off your clothes and get into bed. That's what I always do. Don't think you will be doing less work because you sleep during the day. That's a foolish notion held by people who have no imagination . . ."

I ran across Sir Churchill's quote on the computer the other night, surfing the web, after realizing that I'd overlooked an Important National Holiday of Great Significance:

Hey - you snooze you lose. Ba-dum-bump. Thank you! I'm here all week. Tip your servers!

It doesn't really surprise me that I missed such a notable event; I have been engaged in an increasingly futile attempt to nap since 1997, when my first child was born.

All forms of sleep, in general, elude me these days - my brain never shuts off - and the older I grow, the less I sleep, to the point where I don't think I will ever lay down long enough to die. I'll just stagger around for centuries - the planet's first certified zombie - a wild-eyed, hideous, rotten old woman, begging strangers for Ambien.

Still, I wish I'd known about this National Napping Day, created in 1999 by presidents of The Napping Company - Boston University (BU) Professor, William Anthony, Ph.D., and his wife, Camille - to promote the health benefits of napping.

In a 2005 Napping Day press release from Boston University, the couple listed several significant advantages of napping. Here at Lighten Up! I am all about pilfering that press release and investigative reporting, so I have backed up some of the Anthony's claims with Scientific Facts from Me - The Expert - on account of the fact that I never successfully nap:

- Napping is no sweat - no shower needed
- Scientific Fact: Showering sounds like work. See sentence re: productivity, above.

- Napping is non-fattening - you cannot eat while napping
-Scientific Fact: I'm fat, and getting fatter all the time. Did I mention I cannot nap?

- Napping is no cost - no expensive clothes or equipment needed
- Scientific Fact: As we've discussed, Winston Churchill and I support activities that don't require pants.

- Napping has no dangerous side effects - unless you are driving
-Scientific Fact: I have not, personally, napped while driving, nor have I heard back from anyone who has done so. 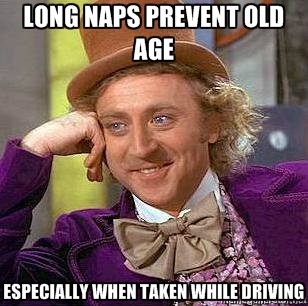 Well, thanks to those bits of hard-hitting journalistic research, we can see that naked mid-day siestas can benefit everyone. The Anthonys summed it up in a mission statement:

“Our goal is to encourage folks to take a nap wherever they may be, at home, at the workplace, or on vacation, and to make it a regular part of their healthy lifestyle,” said William Anthony, who, with Camille, is a co-author of "The Art of Napping at Work."

Yes, I think I speak for many when I say that sleeping in the workplace is a concept most people could support.

Of course, there are those who insist that napping - pants-free - on the job is a bad idea.

But that is a foolish notion held by people with no imagination.
Posted by Dawn@Lighten Up! at 2:43 AM 16 comments: