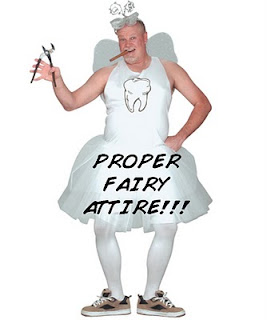 copyright 2010, Dawn Weber
Tooth Fairy?
Not at our place. More like the Fail Fairy.
My poor kid. Witness our conversation first thing this a.m.:

"Uh, Mommy? Something weird happened," he yelled from his room.

I braced myself. 'Weird' can make me kids cry. 'Weird' usually needs cleaned up.
'Weird' is never good, generally involves an animal and makes me late for work.
But, in all my years of parenthood, 'weird' has always waited until after breakfast.

"Okay...what's that?" I said, ever the resigned-to-my-fate brave one.
"The Tooth Fairy left me a dollar, but she didn't take my tooth!" he said, surprised and angry.
"Um...well...uh...maybe she couldn't find it," I said.
"Yeah. Or maybe she has enough teeth right now...I guess...," said my son, trying to hide the disappointment in his wee voice.

I made a mental note to kick some Tooth Fairy ass.

Didn't have to wait long. He/she called me.

"I hear the Tooth Fairy forgot to take Levi's tooth this morning?" I said.
"Yeah. I went in across his floor, it was all 'CREAK! CREAK! CREAK!'" said the Fairy. "His pillow was half off his bed, half on. I'm feeling around under it, couldn't find his tooth anywhere."
"So what'd you do?" I said.
"I put the dollar right by his face, and tried to walk out, but the floor was all 'CREAK! CREAK! CREAK!' again, and he woke up and looked right at me," he/she said.
"Well, you're lucky, you big goober," I said. "He didn't remember that, because he didn't say anything."
"I'm surprised, considering what I was wearing," he/she said. 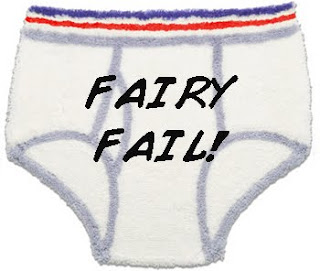 Niiiicccce. The kid probably blocked it out of his memory.

Guess the Easter Bunny/Santa Claus, who weighs less and won't cause as much CREAK, will have to take over tooth duty, too.

Because - on the grounds of slacking, cross-dressing and dubious underwear -  the Fail Fairy is fired.
Posted by Dawn@Lighten Up! at 3:41 AM