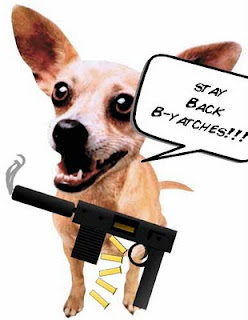 You touch my taco? You die.

Nor may you munch my nachos or snatch my burrito. They are mine and mine alone, got it? I've got $3, I've got dinner. You don't? Move along.

I refer (what did you think I was talking about, perv?) to the wonderful culinary offerings of Taco Bell, that fine restaurant chain established in 1962 (bless you, Wikipedia) by one Glenn Bell, God rest his cheesy soul.

That's right. Here at the Lighten Up Center for Useless Information, we have determined that the honorable Mr. Bell passed away last January at the age of 86.

Also at LUCUI, we (and Wikipedia) have verified that the beloved "Yo Quiero Taco Bell" chihuahua, Gidget, also recently died, July 21, 2009, at age 15 after a stroke and resulting euthanization.

Lighten Up further theorizes that the Taco Bell menu stimulates serotonin, and may cause addiction. Translation: It makes people happy. And may contain crack. Or both.

This is the brain. 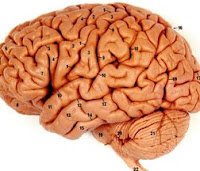 This is the brain on Taco Bell.

Need further proof of the Bell's Power? The Lighten Up Center for Useless Information went to the experts - Facebook friends. Take a look at these recent posts:

"Mexi-Melt! Yumm!" said Mari Darr Welch of Florida, who's been known to eat several in one sitting with me.

"Who said Taco Bell? OH MY GOD!" said Wisconsin's Heidi Frazier, always resorting to CAPITAL LETTERS when the BELL is mentioned usually, by me.

"I am craving Taco Bell and getting the shakes several times a day," said Stacey Hatton of Kansas. "Just say no to the Bell! I have to drive by it to get to my dance class. Ugly temptress to the weak-hearted. Five days clean from Ma T. Bell!"

A problem made worse by late-night beverages shenanigans. That's right - I am, and for many decades have been - a proud partaker of the Fourth Meal.

Certain Saturday nights, out on the town with the husband, I start digging for change. And just before 2 a.m., I start elbowing and reminding him of an important task. This is never the overnight fun - and resulting sleep - he wishes for, but rather a quick run for the Border.

He sighs, grabs the keys and we hit the road. He knows his place, he knows the drill: My Drive-Thru Driver, my Menu-Board Man, my Staticky-Speaker-Stud.

"How can I help you?" says Teen-Taco-Bell-Boy.

"Anything else?" says TTBB.

"Yeah. I want a Burrito Supreme, a regular soft taco and a medium diet," says the husband.

Damn straight, mister - get your own.

There's no touching my taco.

(Taco Bell also inspires mass amounts of creative talent. Check out Heidi Koch Frazer at heidiinwisconsin.blogspot.com, Stacey Hatton at http://nursemommylaughs.com/ and Mari Darr Welch at http://weddingphotographerdestinblog.com/)
Posted by Dawn@Lighten Up! at 5:17 AM