(Copyright 2014, Dawn Weber)
Dashing through the store,
My cart filled to the top,
Tons more gifts to buy,
But I'm about to drop.

Bells outside the doors,

Red kettles want my stash,
But they are out of luck because,
I never carry cash.

A store or two ago,
I thought I'd write some checks,
But soon I had no dough,
In debt up to my neck.

The cashier frowned at me,
My checks they were declined,
The rent-a-cop was sent my way,
I left him far behind. 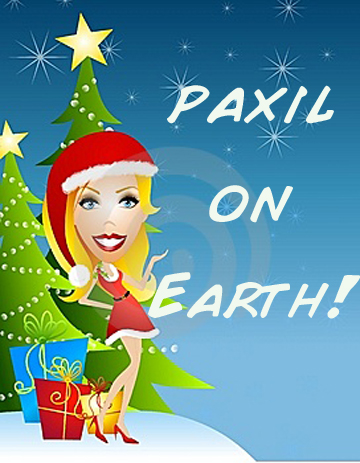 But wait, there's more! Since Christmas is about tradition and the (Green!) Andy Williams Christmas album, here's a little something I wrote three years ago (already - yikes!)

You Spin Me Right Round. Like a 60s Crooner, Baby

Arguing with my best friend - a tradition since 1976.

Yeah, she's entitled to her opinion.

Too bad for her it's wrong.

She is a stellar mother, wife, daughter, church council member and director of food services for an entire state university. She has been my very best friend for nearly 30 years. Still, she is...

And frankly, I don't mind telling her so.

She and I like to debate Very Important Issues. Such as politics, child rearing, religion and the Andy Williams Christmas albums.

In the 70s, over on Garfield Road, she grew up listening to the red-covered "Andy Williams Christmas Album" - the Red One - during the holidays.

While a mile away, on Woodworth Road, I spent my holidays listening to the Green One -"Merry Christmas" Andy Williams.

Yep. From age four, the Green One was always the first Christmas record I loaded onto our ridiculously large wooden console stereo.

That's how it starts out, with "Sleigh Ride." Then, I'd begin my seasonal hobby of spinning in circles in front of the Christmas tree. The music, all those colors - they were everything. They brought magic, and I made it my mission to spin fast enough that my eyeballs would register the lights as one continuous blur.

Goals: Even as a preschooler, I had them. Obviously, I was destined for greatness. And possibly autistic.

We didn't own the Red One, but lots of other folks did. So I tried spinning in circles as they played it on their ridiculously large console stereos. The first song?

"I'm dreaming of a white Christmas..."

Zzzzz. Lame. Try to spin fast enough to blur the lights with that one. I stopped spinning, plunked down and listened to the rest of it. Yeah, Andy still sang, but aside from "It's the Most Wonderful Time of the Year," the record stunk. Lacked a certain Je Ne Sais What.

It was clear that the Red One was for losers.

I told this to my best friend. Then, we argued.

We argued about it in the 70s, wearing polyester.
"Green!" I said.

We argued this in her Buick. We argued in my Ford. We have argued this in our high school, our kitchens, on cruise ships, on the phone and on Facebook. The other day, I received this text from her:

Sorry about your luck, my BFF. Because I now have proof positive that the Green Andy Williams album is better. I found the following information about your Red One on Amazon.com, therefore it must be true.

See that, Amber? Wade here says that "Andy's consummate artistry was better in the 'Green Album'"... and that "I will go to play the "Green Album before the 'Red Album.'"

And it's not just Wade, Amber. No. Rodney also prefers the green:

"Christmas man" Rodney says that the Green One "has a little more christmas spark in it..."

As you can see, "Joshua" feels strongly about this.

So go ahead, Amber, play your loser Red One.

I'll be spinning and dancing in front of the tree, playing the Green One, along with Wade, Rodney, Joshua, the rest of "Mankin" and this cool cat: