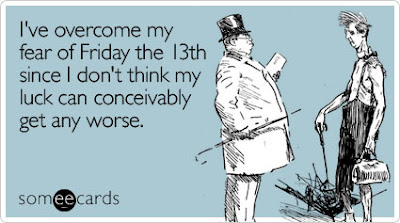 (Post copyright 2012, Dawn Weber. Image from someecards.com.)
Part 2 of the Derecho Fiasco.Go here for part 1, and I should mention this post was actually started last week, so some dates and details have changed.


There is a fine, fine line between "camping" and "homeless."

That line has a name. Want to know what it is?

Ah, flushing - you complete me. Literally.

Yep. Ever since the tornadoes/straight-line-winds/land hurricane/whatever-the-f*ck-it-was blew through Ohio, knocking out the power and plumbing and turning our residence into a gott-dang federal disaster area, what I have really missed is a functioning toilet and the septic tank. Also bathing.

Hahaha! What a fun weekend. The four of us, my family, like stunned, stinky homeless crackheads, hollow-eyed and shuffling between one tiny car, a half-destroyed house, a camper and sometimes a hotel room. It's been weak coffee, warm beverages, spoiled food and repeated pleas to the children: "Do you have to poop? For the love of all that's holy - poop at the HOTEL! Poop NOW while you CAN!"

And I'll tell you something else: I have never in my life been more happy to see my cubicle.

"You're really going to work today?" asked the husband.

Hellz yeah, I am.

Are you kidding me? My cubicle, my office building? It's the freakin' Taj Mahal up in here. There is air conditioning! Electricity! Basic shelter! Cell phone service! Pinterest Internet access!

And again, people - let me direct your attention to the toilets that flush.

They called it a land hurricane, a derecho, the freak of nature that cut a 700-mile swath of chaos across the Midwest and Mid-Atlantic June 29. And you would think that the storm's major destruction and damage to the roof, two ceilings, two vehicles, one swimming pool, three fences and the entire yard would be enough bad luck for us. You'd think that a week without power, in a tin can camper during 104-degree weather, would be enough misfortune for the Webers.

You'd think that, but you, sir, would be wrong:

And really, I don't miss the roof too much. Or the ceilings in the sunroom and garage. Or the driveway. Or the Honda or Ford. Or the fences. Or the yard. Or my money.

You know what I miss?

But it's all good! Homelessness Camping That which doesn't doesn't kill you makes you stronger! Never, ever give up! And all of that happy horse-shit!

Yes, fellow homeless crackhead campers, in hard times like these, I've learned many things in 104-degree weather. I have much wisdom to pass on to you and your children, and I've pondered several of life's difficult questions, such as: