The 80s: Decade of Unfortunate Hair. And So Much More! 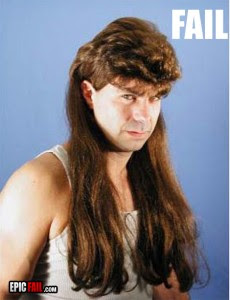 In fact, this hairstyle says many things, such as:

Yes, the mullet: Bad enough on a man.

A freak of nature on a woman.

That's right. If you think this hairstyle was just for guys, you didn't live through the Reagan administration. Case in point: 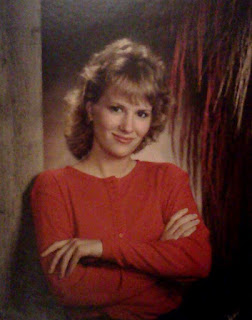 That's my mulleted senior picture up there, 25 years and 25 lbs. ago. I'd kill for that chin - although I have several chins now, so really, I'd kill for just one chin. But that hair? Was totally for sure business-in-the-front, party-in-the-back.

You youngsters out there, laughing at the mullet. "Ha Ha Ha!" say you.

Shut up. It was the 80s - everybody mullet. Pretty much a federal law. And some of us had more success than others. Just like, this, um, girl:
Epic chick-mullet. I bet she's glad someone saved her mullet mug-shot. I sure am happy my mother saved mine. She really treasured it, too, I can tell because for the past couple of decades, she's had it stored on the top of a dusty open box in her garage.

Nice. I am feelin' the love, there, Mom.

She pulled it from the pile at Christmas, swept off most of the dirt, slapped on some gift-wrap and gave it to my husband. That's the general gift-giving procedure of a 68-year-old woman on Social Security: Dust something off, wrap it up.

And now this thing hangs in our house, where everyone can admire my mullet, and I have to see it all the damn time.

I don't look much like the mullet-girl in my senior picture anymore, but I remember her. She majored in flammable, piece-of-shit cars, classic rock and minor acts of spray-paint vandalism. She worked at McDonald's and lived for Saturday night. She was probably supposed to work AT McDonald's ON Saturday night. But if there was a party somewhere, that did not happen.

There are things I'd like to tell this girl, things she should know. Such as purple and blue work great in crayons, but eyeliner and mascara? Not so much. Also, the main food groups are dairy, meat, grains and fruits and vegetables. Not sugar, grease, salt and cheap beer.

That boy you like? The one who never calls or asks you out? Yeah - that's a sign! He isn't interested at all. But admiring him keeps you mostly out of trouble with the boys who do like you. So carry on with that. Additionally, you should know that red traffic lights are not just a suggestion, and rainy roads can be slicker than snot. Remember this in 1988. And 1989. Also shut up 1991.

Sit down and talk to your grandparents more often. Pretty soon, they'll be gone, and then you'll only see them in dreams.

Start your AP English senior term paper. Start it now. Do not wait until the day before it's due. It's 1987. Teachers can (and will) throw heavy objects at you.

Yes sir, judging by my poor choices, hairstyle and purple eyeliner, I was a teen of the 80s. Were you?

Here at Lighten Up!, we are all about the BS hard-hitting, investigative journalism, so let's find out:

You were a kid of the 80s if you remember:

-Growing concerned about your palm-sweat output during the Couples' Skate.
-Spending Saturday morning hunched in front of a boom-box for the countdown, fingers poised on 'record' and 'play.'
-"Oh, Mickey you're so fine, you're so fine you blow my mind! Hey, Mickey! Hey, Mickey!" (Kill me, please. Kill me now.)
-Wishing you had Jessie's Girl.
-Wishing you WERE Jessie's Girl.
-Furtively disassembling and reassembling your Rubik's cube, then showing your mom, because you "solved" it.
-"Look for the purple banana 'til they put us in the truck . . . " (Prince. WTF were you smoking?)
-Never watching the 'Very Special' episode of "Family Ties" or any of your other favorite sitcoms. 'Very Special' was code for pregnancy, drugs and/or alcohol. Parental discretion was advised.
-Singing along to "Rock Me, Amadeus." Smacking the shit out of yourself for doing so, but still - singing along.
-Stabbing a Stretch Armstrong to see what's inside.
-"I only wanted to see you bathing in the Purple Rain . . ." (Again, I say - Prince: What the purple f*ck were you smoking?)
-Rocking the middle-school fashion world in your sweet new "Members Only" jacket.
-"We don't have to take our clothes off . . . to have a good time" (No, but it sure helps.)
-Calling 867-5309, hoping Jenny would answer. She never did. Dammit.

Well, I hope I have provided some vital insight into your past. As you can see, I am full of bullshit valuable information.

Really. Who needs Google when you got me?

And with that, from the decade that brought you such important contributions as the single glove, the Tammy Faye Bakker, and the almighty mullet, I leave you with one epic, final, definitive thought: