The Day of Three Burritos 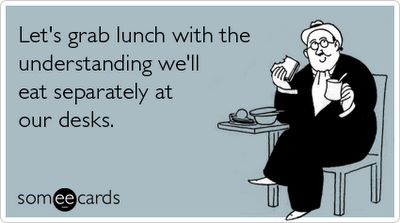 Just like the other day at lunch-time, when he burst into my cubicle.

For shit's sake, he didn't even give me time to look up from the Pinterest important work research I was examining. Normally he approaches my pod in a shuffling manner, groaning all the way across the 25th floor, from his space to mine. On this particular day, he just barged in on me. No shuffles, no groans. Apparently, he had big news.

"What, Al, what did you do?" I said, annoyed. I wanted to get back to my important lunch-break Pinterest work research. That is just the kind of dedicated employee I am.

Whoa. I closed out of Pinterest my important work research. This was going to be gassy good. I could tell.

"What do you mean three burritos? Are you crazy?"

"I ate one here, from the cafeteria. Then we went to Chipotle last night, waiting to pick my daughter up from practice, bought a burrito, ate that one in the car," he said.

But he wasn't finished. No sir, he wasn't.

"Then I got ANOTHER one from Chipotle, was going to save it for lunch today. But I ate it, too. Last night. Couldn't wait."

"Al. Three burritos? You know, those things have, like, eleven-hundred calories each," I told him. "You're going to explode. Get out of my cubicle."

"Mmph." Rubbing his distended belly, he ambled back to his desk and threw himself into the chair.

There are some things you should know about my buddy Al:

We've worked together for more than five years now, on the 25th floor of a high-rise in downtown Columbus. But we both originally come from the greater Youngstown, Ohio area which - we think - makes us mobsters savvier than most folks. Yes, we have decided that we are wise and cool. According to us.

I generally greet him, my Y-town pain-in-the-ass partner in crime, each morning. He lurches into the office, shuffling and groaning, and throws himself into his chair. Maybe I'll say:

Walking by him later in the day, sometimes I ask:

Feeling tired gives Al time to think of ways to mock me, and also to develop his theories. Because he has lots of theories. About life. About burritos. About my clothing. Yes, I have the great good fortune of receiving my buddy Al's thoughts on everything, up to and including my wardrobe. He's thoughtful like that.

For instance, my red gingham shirt.

"What is that? Some kind of...some kind of picnic blanket? Ha ha ha!"

And my green vinyl snow boots. 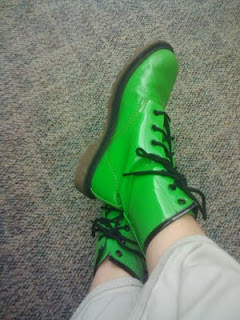 "What are those? Some kind of...some kind of leprechaun ass-kickers? Ha ha HAA!"

Now isn't he rude generous? He just gives and gives me shit.

Later on Al's Day of Three Burritos, I bravely went to visit him in his cubicle as he deflated recovered. We discussed his theory of "The Dummies."

The Dummies lurk everywhere: the grocery store, the Interstate, Chipotle. They're easy to see, though, because they're always in line. This irks Al. Al has a life motto:

"Don't wait in the line with the rest of The Dummies!"

Al told me how to skillfully avoid Dummies. I'll share these skills with you, though you may be a Dummy yourself.

Involving oneself with Dummies means waiting, elevated blood pressure and wasted time, says Al. Why hang with Dummies when you can cruise away from Dummies?

Al stared out the window at a line of cars. They stood stock-still during evening rush hour, along Spring and High Streets. Dummies in Gridlock. 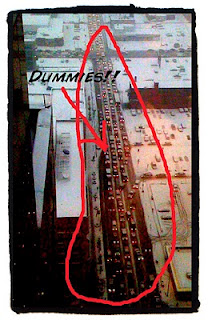 "Just look at all those Dummies," said Al, shaking his head.

He then gave me a detailed scheme to avoid this situation. He said that one should work out an "alley plan" before pulling into such a mess. One could zip down side streets, avoiding Dummy traffic.

But that wasn't the only traffic advice he had. No sir, it wasn't.

Al said that - when approaching a traffic jam near an interstate exit - one should get in the far right-hand lane, and pass all The Dummies on the right.

Next, look for a semi-truck on the left, and then merge in front of it. He said to leave plenty of space, avoid cutting the trucker off. One should also thank a trucker with a wave or flick of taillights.

As we turned away from the window, gathered our belongings and walked to the lobby, I thought about my buddy Al's Respect the Truck/Dummy Passing method. I told him that this tactic will not please the drivers of the cars lined up and waiting in the left lane. He was not concerned.

He pushed the elevator button, looked over at me and shrugged.

He rubbed his burrito-bloated belly as the elevator doors opened. "You coming?"

Looking up at him, I smiled.

"Nah. Thanks Al. You go on ahead. I think I'll just wait for the next one."

Clearly, I am not a Dummy.


(This is a re-worked post from a while back. I was inspired by my friend Vapid Vixen's genius post, about her co-worker Toph. Go. Read it now. One day, I shall exact a similar revenge on my buddy Al, who surely deserves it. You wait. You'll see.)
Posted by Dawn@Lighten Up! at 2:55 AM