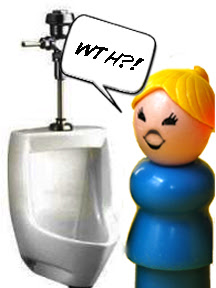 Well spank my ass and call me 'Don.'

Yep. Dawn - is gone. Because now I really can do anything a man can do. Like pee while standing up, with a Female Urination Device (F.U.D.) such as the GoGirl.

No more of that tiresome knee-bending, that sitting down to urinate. Such exertion!

When nature calls, with an F.U.D., a woman can simply stand and place the funnel over her, um, naughty bits and, um, urinate, aiming the, um, stream wherever. 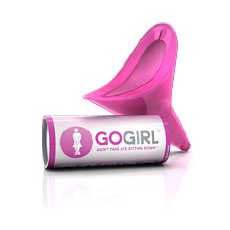 She can make some yellow snow. See a man about a horse. Drain the main vein. Piss up a rope. Drown the ants. Siphon the python. Water George's bush.

I know, girls, I know. It's very exciting, and it was all news to me. But F.U.D.-type devices have been around a long time, and the GoGirl ranks as one of several, er, female funnels. There's the also the pStyle, the Urifemme and the P-Mate, to name a few.

They say it keeps our fragile female flesh from the festering toilet seat. Now we can stand, whip out the GoGirl and shake the snake all over the stall. Just like a man! Hygienic - for us. For everyone else? Not so much.

As heavenly as all this sounds, I have to say that ways to wee-wee have never ranked highly on my list of concerns. I am from the School of the Squat. The House of Hover. My arse hasn't touched a nasty public toilet seat in 30 years, and it won't. Ever.

It's a useful trick that I recommend. Anyway - from what I've seen - the Average American Ass could use several hundred a few squats.

Now don't get me wrong - there are enviable things about men. They can lift heavy furniture. They age well the bastards. They've elevated farting to an art form.

However - long restroom lines aside - I've never been jealous of a man's ability to, er, wave the wand.

"The World Is Your Toilet!"

That? Right there? Is Klassy with a K, people. Where's my credit card?
Posted by Dawn@Lighten Up! at 2:28 AM