OK - You Can Go Back to School Now! 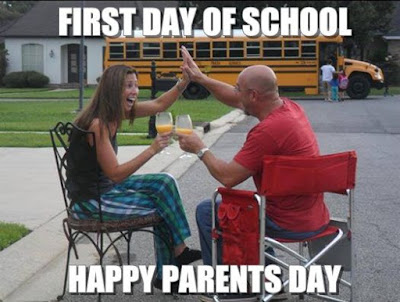 OK you can go back to school now!
Oh crap - did I say that out loud?
For months, I've had no alone time,
One is company, but three's a crowd.

You guys ate your weight in Doritos,
And I tried hard to stock up on Lay's,
Plus those gross Little Debbie snack cakes,
I buy in bulk - and they're gone the next day.

There are zero cups in the cupboard,
They're spread through the rooms far and wide,
You fill them up with blue Gatorade,
Take one sip and then set them aside.

The house is a total disaster,
It looks like a big bomb went off,
But not your average explosion,
Rather, one made of shirts and flip-flops.

The PlayStation's nearly on fire,
You're on it from morning till night,
And though it's the middle of summer,
Your skin tone is Wonder-Bread White.

"There's nothing to do! I'm so bored!"
I hear it again and again,
That's funny - I see a lot that needs done,
Perhaps you need a suggestion.

I'd like to be able to relax,
Maybe sip coffee solo till nine,
And later on, if the day goes right,
I could open a nice box of wine.

Oh yes - couches, coffee and wine,
Those are three of my favorite things,
But thanks to your constant presence,
I haven't indulged since late spring.

I love you both - you're adorable,
I live my whole life for you,
It's just that you're always around here,
I'm not even alone when I poo.

So yeah. You can go back to school now,
You're cute, but you're making me crazy,
There on the couch with your phones in your hands,
Finding new ways to be lazy.